Please ensure Javascript is enabled for purposes of website accessibility
Log In Help Join The Motley Fool
Free Article Join Over 1 Million Premium Members And Get More In-Depth Stock Guidance and Research
By Bram Berkowitz - Mar 29, 2020 at 10:13AM

Find out which are keeping repurchases in place and which are cutting back.

The coronavirus has thrown a bit of a wrench into the banking industry's plans for stock buybacks. On one hand, bank stocks have been hammered, with many now trading below book value. Similar to the ordinary trader, banks like to buy back stock when it's cheap.

But on the other hand, the virus has had such a unique and harsh impact on the economy that many banks have suspended their buyback programs to show the public they are behind them in this pandemic. The eight largest banks in the U.S. announced together on March 15 that they would be suspending stock buyback programs through the second quarter of the year in response to the virus.

The news was a big deal because share buybacks are a significant way that banks can boost profits for investors. During a buyback, companies purchase their own shares from the market, reducing the amount of outstanding shares in circulation and thus increasing the value of each remaining share.

Warren Buffett noted earlier this year on CNBC that Berkshire Hathaway's ownership stake in Bank of America (BAC -1.24%) would probably increase 7% or 8% in value because of the bank's buyback plans.

Since the announcement from the largest banks, many have wondered how the rest of the banking industry would respond. Would regional or smaller banks suspend buybacks as well? On March 12, S&P Global reported that in the prior three weeks, 22 banks had announced share buyback plans, compared to eight in the prior year period.

But a lot has changed since then. Here's a look at five banks suspending share buybacks, and five banks planning to continue or even expand them. 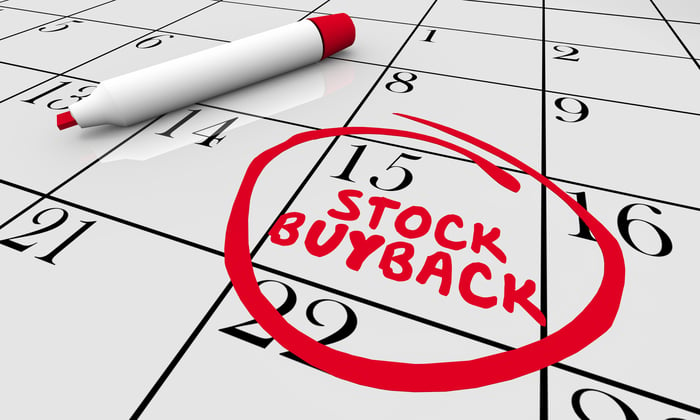 Many large banks seemed to follow the lead of their peers. The $410 billion asset PNC Financial Services (PNC -1.49%) suspended its buyback program a day after the eight largest banks did.  Other smaller banks have followed suit. Brookline Bank (BRKL -0.60%) in Massachusetts, with about $5 billion in assets, actually doubled the amount of shares it planned to buy back on March 9, but then suspended the program on March 24.

One thing to note about this group of five is they all had good years in 2019, each delivering a return on assets (ROA) greater than 1%, and each with a return on equity greater than 10%. Minus PNC, four of these banks also had very strong efficiency ratios in the high 40s and low 50s, meaning they were keeping their expenses as a small percentage of revenues. Some of the banks were a bit heavier on the commercial side and had a little bit higher level of reserves stashed away, but overall they seemed to be coming off solid years at a quick glance.

All of the following banks announced their share repurchase programs between March 10 and March 19, well into the thick of the coronavirus. While they can terminate the programs at any time, none had done so as of mid-day on March 27.

The $2.2 billion Mid Penn Bank (MPB -1.33%) in Pennsylvania announced the adoption of a stock repurchase program authorizing the repurchase of up to $15 million of the bank's outstanding common stock, representing roughly 10.5% of outstanding shares. The $1.8 billion asset Chemung Canal Trust Company (CHMG 0.09%) in New York announced it would repurchase 5% of its outstanding shares, and the $3.2 billion asset City Bank (SPFI -1.50%) in Lubbock, Texas also authorized its buyback program. The $2.1 billion asset Investar Bank (NASDAQ: ISTR) in Baton Rouge, Louisiana and the Southside Bank (SBSI -0.80%) in Tyler, Texas both extended their buyback plans to repurchase even more shares.

All of these banks except Southside Bank are trading below book value. As a group, these banks definitely performed worse in 2019 than the five above that suspended their buyback programs. Mid Penn Bank, Chemung, and Investar all had ROAs of less than 1% and ROEs of less than 10%, although they didn't have bad performances on the whole.

Additionally, all of these banks except for Southside had very high efficiency ratios. Obviously, this group of 10 banks is a small sample size, but it could suggest some of the lesser performing banks are trying to squeeze their stock buybacks in during a volatile year, while better performing banks feel safe enough to forego it, at least until later this year.

How to take advantage

In theory, if a bank continues its buyback program while others suspend them, those stocks could perform better in the short term, obviously depending on the bank and how things play out with the virus.

But it is important to think long term, and consider if a bank actually sees a repurchase plan as the best way to spend its money, or if it is simply trying to make itself look better than it actually is. Some of the companies conducting buybacks are not the best performers out there, while all five that terminated their buyback plans more or less had very solid years in 2019.

Out of those still conducting buybacks, Southside Bank certainly looks like a great buy, considering it had good profitability metrics, asset quality, and a solid efficiency ratio in 2019. City Bank performed the second best out of those five doing buybacks and, unlike Southside, is trading below book value.