The drop in Macau's gaming market over the past two years has been driven, in large part, by a drop in VIP gaming play. Macau used to be a place where junkets would bring in big players and borrow them money to gamble, eventually being paid back in Chinese currency (leading to money laundering). This led to a crackdown on Chinese corruption and money laundering, which in turn led to a drop in VIP gambling.

But there are signs that high rollers are starting to return to casinos. Amid the recovery in Macau's gaming overall in the last six months, there's been a surge in VIP play. And that could be a boon for Wynn Resorts (NASDAQ:WYNN), which focuses on VIPs, and will also help operators like Las Vegas Sands (NYSE:LVS), Melco Crown (NASDAQ:MPEL), and MGM Resorts (NYSE:MGM).

The chart below shows the recovery I'm talking about. Between the second and fourth quarter of 2016, VIP gaming revenue grew 25.3% while mass market play increased just 6.1%. 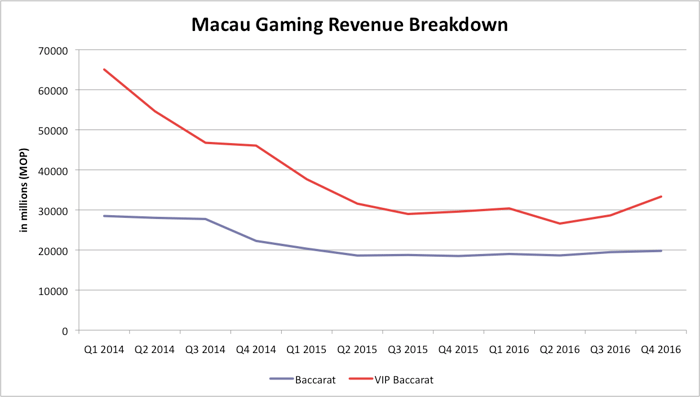 This is a stark change from the trends of the last two years. But it could also have a big impact on what gaming stocks perform well in the future.

The big player in VIP gaming

Different companies focus on different parts of the gaming market. Las Vegas Sands has built its business on being a mass market operator, mainly by building out thousands of hotel rooms and massive gaming floors. So, when Macau's VIP market began to decline, it was less affected because the mass market didn't decline nearly as much.

Wynn Resorts, on the other hand, is all about VIPs. The company's casinos are built for exclusivity and the luxury high rollers love. Hotel rooms are larger, there are fewer of them, and the gaming floor is more exclusive than at Las Vegas Sands casinos. When the VIP market declined, Wynn was disproportionately affected. And now that it's recovering, Wynn should see a disproportionate increase in gaming revenue.

Somewhere in the middle lies MGM Resorts and Melco Crown. They try to attract VIP players, but it's not their sole focus. And without as much scale as Las Vegas Sands it's hard to have the same mass market exposure. The VIP recovery will be helpful for them, but not in the way it is for Wynn Resorts.

What we don't know is if the recovery in VIP play will continue. China's policies have changed over time, and if there's a tightening of policy on high rollers, the uptick in VIP gaming revenue we've seen lately may not continue.

For now, the trends are starting to turn positive for Macau and VIPs are surprisingly leading the charge. If that continues, Wynn Resorts could be the hottest gaming stock of 2017.