Shares of Workday (NASDAQ:WDAY) recently rallied after Wal-Mart (NYSE:WMT) subscribed to its Human Capital Management, Recruiting, Learning, and Planning products. Wal-Mart has over two million employees and is the world's largest private employer, so it could easily become Workday's largest customer. 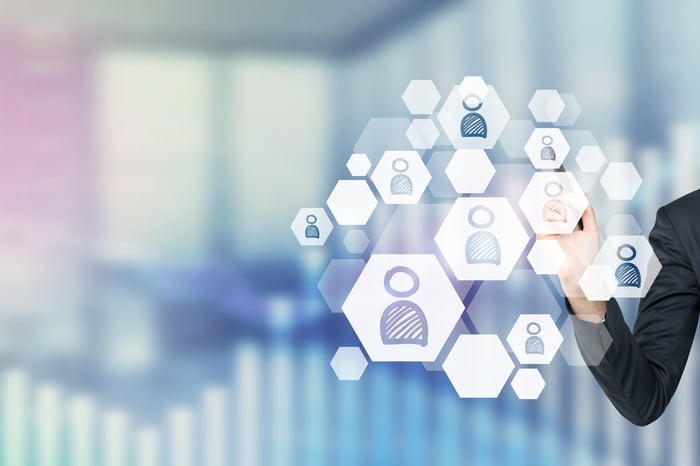 Based on that employee count, Drexel Hamilton analyst Brian White claims that the deal could potentially generate $100 million to $200 million in annual revenues for Workday. But White warns that Workday didn't specify how many Wal-Mart employees will be included in the deal, and that its revenue impact wouldn't likely be fully recognized in the first one or two years. Let's discuss what this deal means for Workday and Wal-Mart, and whether or not it makes the cloud applications provider a worthwhile buy.

What this deal means for Workday

Workday's enterprise cloud applications help organizations staff, pay, and organize their workforce. They also use analytics and machine learning to help organizations make financial and workforce-related decisions. Demand for Workday's services has been robust -- its revenue rose 68% in fiscal 2015 and another 48% in fiscal 2016. Analysts expect its revenue to rise 35% this year.

That top line growth looks strong, but Workday's stock plunged in early January after it announced that some of its bigger deals were delayed by global uncertainties regarding Brexit, the U.S. presidential election, and other G8 country elections. As a result, Workday reduced its fourth quarter revenue forecast to 32%-33% growth, missing the consensus estimate for 34% growth.

$100 million to $200 million in revenues would equal 5% to 10% of Workday's projected revenues for next year. However, Workday didn't update its guidance after the Wal-Mart announcement, and White's warning about the ramp up period indicates that investors shouldn't expect to gain a big tailwind over the next few quarters.

Workday, like many other SaaS (software as a service) providers, is also struggling with profitability because the cost of securing new customers and price competition often outweigh its subscription revenues. Workday squeezed out a narrow non-GAAP profit of $0.03 per share last quarter, but it remains unprofitable on a GAAP basis. Therefore, Workday likely spent heavily to secure the Wal-Mart contract, but we won't see if the benefits outweigh the costs until a few years later.

What this deal means for Wal-Mart

Under CEO Doug McMillon, Wal-Mart invested billions into retraining its workforce, clarifying career advancement paths, and increasing wages. But Wal-Mart also recently announced that it will cut hundreds of jobs in a fresh round of layoffs -- many of which will come from its human resources department.

Since that announcement coincides with the Workday deal, it's likely that Wal-Mart plans to use automated cloud services to take over some of those manual HR tasks. A few hundred jobs only represent a tiny slice of Wal-Mart's workforce, but those job cuts could still boost Wal-Mart's earnings, which are expected to drop 6% this year due to higher expenses. Looking ahead, Wal-Mart could also use Workday's analytics services to decide which departments to downsize and which ones to invest more heavily in.

So is this deal a "game changer" for Workday?

Partnering with Wal-Mart is a positive development for Workday, but it isn't a game changer. The ramp up period will be long, and it's unclear how many of Wal-Mart's two million employees will actually use Workday's services, so Drexel Hamilton's estimates might be too optimistic.

Workday already serves plenty of Fortune 500 customers, and it's carved out a niche in the highly competitive cloud SaaS market that bigger rivals still can't touch. But it's also deeply unprofitable, and the stock trades at 11 times sales -- which is much higher than the industry average P/S of 4 for application software companies. Therefore, Workday's future looks bright, but I'd like to see steadier bottom line growth and lower valuations before I start a position in this volatile stock.