Across the U.S., department stores have been downsizing because of plummeting mall traffic and the steady shift of consumer dollars toward e-commerce. Earlier this month, Macy's (NYSE:M) identified 63 stores that it will close in the next few months.

Upscale retailer Nordstrom (NYSE:JWN) faces the same negative trends as Macy's in its full-line business. However, while Nordstrom's management has shown a willingness to close a store here or there, investors shouldn't expect any kind of massive store closure program at Nordstrom. 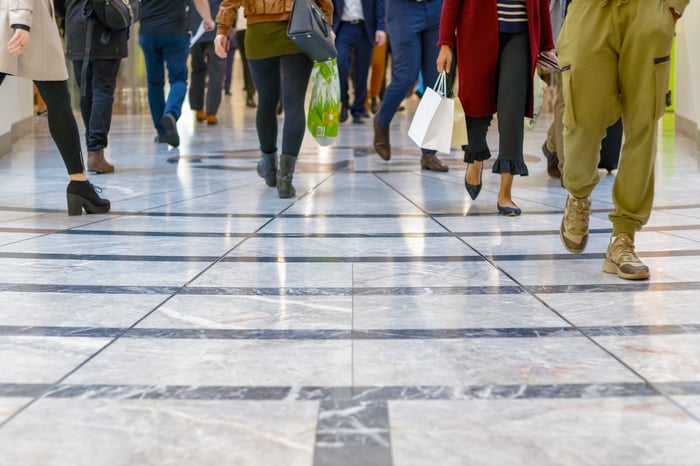 During mid-2016, Nordstrom closed one store, at Westfield Horton Plaza in downtown San Diego. The company has three other full-line stores in the San Diego metro area, including a very successful one just 5 miles from Horton Plaza at the Fashion Valley mall. Nordstrom was also able to sell the Horton Plaza store building to mall owner Westfield.

Last week, Nordstrom announced a second store closure. In March, the company will shutter its location at the MainPlace Mall in Santa Ana, California. While Nordstrom noted that southern California remains one of its strongest markets, the company still has another six full-line stores in Orange County alone and more than a dozen in the greater Los Angeles region.

As was the case for the San Diego store, Nordstrom will sell its MainPlace Mall store to the mall operator, generating some extra cash.

Nordstrom has a lean footprint

For Macy's, closing stores en masse is a no brainer. With more than 750 Macy's and Bloomingdale's stores spread across the U.S., many markets have more stores than necessary. Thus, when Macy's closes a store, it typically retains a substantial proportion of the sales from that store at nearby locations or through its e-commerce site.

By contrast, Nordstrom currently operates just 123 full-line stores (five of which are in Canada). These stores punch above their weight, with more than double the sales per square foot of Macy's, on average.

There are few, if any, bad stores in Nordstrom's portfolio. Moreover, very few metro areas have more than a handful of Nordstrom stores. While Nordstrom does have a very strong e-commerce business, many customers still want the option to go into a brick-and-mortar store to see merchandise in person or make a return. As a result, Nordstrom risks losing market share because of a lack of nearby locations if it closes full-line stores.

Most Nordstrom stores are here to stay

Nordstrom has plenty of flexibility to tweak its full-line store footprint in the years ahead. The company owns about 30% of its full-line stores, while another 50% are ground-leased, meaning that Nordstrom owns the store building itself but leases the underlying land on a long-term basis. Most of these stores are in highly successful malls, meaning that Nordstrom could probably fetch a substantial sum by selling them to mall owners.

However, the Los Angeles metropolitan area is the only part of the country where Nordstrom full-line stores are plentiful. Nordstrom could close one or two more stores in that region if mall traffic continues to decline. Elsewhere, sales would have to fall a lot further before it would make sense for Nordstrom to close additional stores.

In the coming years, Macy's will try to get back on track by right-sizing its store base. By contrast, Nordstrom will have to boost its profitability the old-fashioned way: by introducing innovative features that draw customers back to its stores.