In total, Spirit Airlines shares soared 35% between mid-October and mid-December. However, the stock started to lose momentum a few weeks ago. It fell further on Tuesday after Spirit released an updated fourth-quarter forecast that left many investors disappointed. 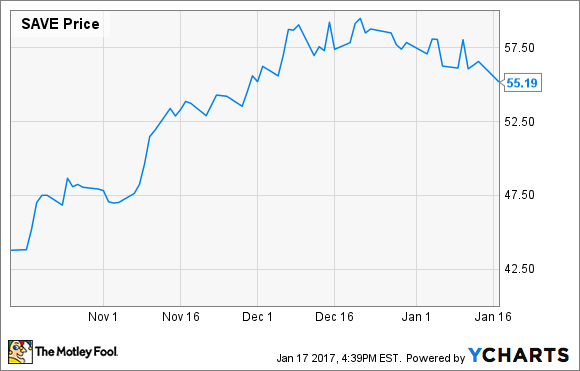 It's true that unit revenue declined again at Spirit Airlines last quarter, whereas American Airlines (NASDAQ:AAL) got back to the flat line, with the other legacy carriers close behind. Nevertheless, Spirit's guidance update was better than it may have appeared.

Unit revenue is on the way to recovery

On Tuesday, Spirit Airlines estimated that its revenue per available seat mile (RASM) fell about 3.6% year over year last quarter. This is near the midpoint of the company's earlier guidance that RASM would decline 3%-4.5% in Q4. It's also substantially better than Spirit Airlines' 7% decrease in RASM for the third quarter.

Still, based on the sell-off in Spirit Airlines stock, it would appear that investors were hoping for more. Indeed, American Airlines raised its unit revenue guidance several times over the past few months. American originally forecast that RASM would decline 1%-3% in Q4, but it now expects RASM to be roughly flat year over year (give or take 1%).

However, there's no reason to worry that Spirit Airlines is somehow missing out on the industry's unit revenue recovery.

American Airlines and its fellow legacy carriers benefited beginning in November from an improvement in fare levels for the last-minute tickets typically booked by business travelers. By contrast, Spirit Airlines doesn't carry much business traffic. Leisure tickets tend to be bought further in advance, so unit revenue improvements are slower to materialize.

Additionally, Spirit Airlines launched more than a dozen new routes during Q4, with most of those starting in late October and November. These new routes are part of the strategy shift implemented by Spirit's new management team. They should contribute positively to Spirit's results during Q1. However, these routes were still early in the process of ramping up last quarter, negatively impacting unit revenue.

Costs come in below projections again

On the bright side, Spirit Airlines' costs are set to come in below projections. First, the company now expects its non-fuel cost per available seat mile for Q4 to be 5.45-5.50 cents. That would be up 5.8%-6.8% year over year, compared to Spirit's original forecast of an 8% increase.

Second, fuel costs will be lower than Spirit Airlines had anticipated. The company paid $1.64 a gallon for jet fuel last quarter, whereas it had originally expected its economic fuel cost to reach $1.70 a gallon. Additionally, Spirit's fuel efficiency was about 1.2% better than expected during Q4.

With unit revenue roughly in line with the company's guidance and unit costs set to come in lower than expected, Spirit Airlines has a good chance to beat analysts' average EPS estimate of $0.68 when it reports earnings next month.

Investors want unit revenue growth -- and they will get it

Thus, the recent investor update suggests that Spirit's Q4 earnings could come in higher than analysts had expected. Yet all that airline investors seem to care about right now is unit revenue growth.

Spirit Airlines didn't see a sharp improvement in RASM during the quarter as American Airlines did, simply because it has a different business model and different customer focus. It will take a little longer for the recent improvement in demand to filter through to Spirit's results.

Nevertheless, Spirit remains on track for a solid revenue recovery in 2017. It will be helped along by very easy year-over-year RASM comparisons, especially in the first half of the year. As unit revenue recovers, Spirit Airlines stock could begin marching higher once again.