On Tuesday afternoon, United Continental (NASDAQ:UAL) reported solid earnings for the final quarter of 2016. The company's pre-tax margin slipped modestly relative to Q4 2015, but this was better than what the company had originally expected, thanks to an improvement in last-minute bookings that began in November.

However, there was no reason for investors to cheer, as United projected that its adjusted pre-tax margin would sink to a meager 0.5% to 2.5% in the coming quarter. This shows that United Continental is still far from fixing its profitability problems.

In Q4 2015, United Continental posted a strong 10.4% adjusted pre-tax margin. Entering the fourth quarter of 2016, though, United expected its pre-tax margin to slip to a range of 5% to 7%, due to a mid-single-digit decrease in unit revenue.

As a result, United raised its margin guidance twice in the past few months. On Tuesday, the company reported that it earned a 9.5% adjusted pre-tax margin for Q4. While this is down slightly on a year-over-year basis, it's perfectly respectable.

Not surprisingly, United Continental stock soared along with the company's improving outlook during the fourth quarter. Between mid-October and mid-December, the stock gained about 40%. 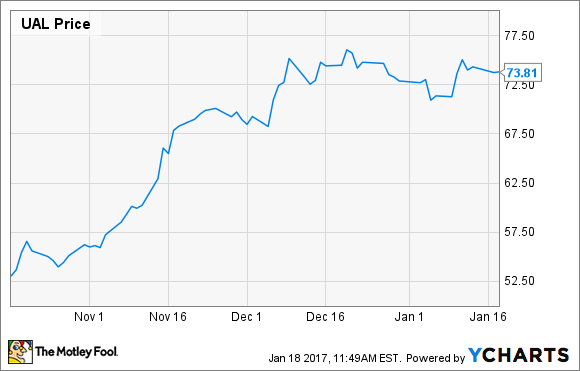 Costs on the rise

For 2017, the outlook isn't quite so rosy. At United's investor day last fall, management warned investors that non-fuel unit costs would rise 3.5% to 4.5% this year due to rising labor costs.

In Q1, United Continental will face even more cost inflation, with non-fuel cost per available seat mile up 4.5% to 5.5% year over year. Additionally, fuel costs are rising again. United expects to pay $1.76/gallon for jet fuel this quarter, up from $1.37/gallon a year earlier.

Meanwhile, United Continental projected that its unit revenue will be roughly flat year over year in Q1. That would represent another sequential improvement. However, it's not really good enough: United needs strong unit revenue growth to offset its rising costs. As a result, the company's pre-tax margin is set to plunge to a range of 0.5% to 2.5% from 8.4% in Q1 2016.

To be fair, United Continental's business is highly seasonal, and the first quarter is always the worst in terms of profitability. A few years ago -- when oil prices were much higher -- the company would routinely lose money in Q1. Nevertheless, the steep projected decline in United's profitability for this quarter is worrisome.

At United's investor day last November, the management team described a variety of initiatives designed to boost annual operating profit by $4.8 billion by 2020, relative to 2015. At the time, United forecast that it would see a $1.8 billion positive impact in 2017.

United has big plans to boost its earnings in the next few years. Image source: The Motley Fool.

However, the recent increases in United's fuel and labor costs are more than offsetting its cost-efficiency and revenue-enhancing initiatives for now. The bulk of United's projected profit improvement is still to come, but its actual profit growth is likely to be a fraction of the $4.8 billion increase it is targeting.

So far, investors are giving United Continental a pass for its relatively weak outlook. Many of them may be hoping that management gave a conservative revenue and earnings forecast in order to dampen expectations. Indeed, in each of the past three quarters, United has beaten its original unit revenue forecast.

If United does return to meaningful unit revenue growth this quarter, it would indicate that the company's profit improvement plan remains on track. But if it can't do better than flat unit revenue, investors are likely to be disappointed, causing United Continental stock to give back some of its recent gains.