Shares of TiVo (NASDAQ:TIVO) rose 23.3% in 2016, according to data from S&P Global Market Intelligence. It was a roller coaster of a year, and this is not quite the digital video recorder specialist you used to know.

In March, rumor had it that media information expert Rovi was planning to acquire TiVo. One month later, that deal was signed, sealed, and delivered. In early September, the last hurdle had been cleared and Rovi completed its TiVo buyout. The combined company immediately exchanged all remaining Rovi shares for new TiVo stock, adopted TiVo's ticker as its own, and took on the household-name TiVo brand.

From there, the new TiVo proceeded to sign licensing deals with a plethora of consumer-facing brands, covering the use of both TiVo's own video-recording technologies and Rovi's patents on media-information processes. 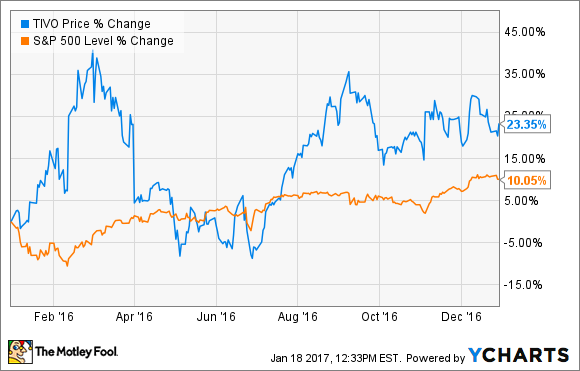 Making sense out of the new TiVo's financial reports can be a challenge these days. "Following the acquisition of TiVo Inc., TiVo is raising its estimates," the company said in November's third-quarter report. For clarity, the old TiVo was known as "TiVo, Inc." while the rebranded Rovi is called "TiVo Corp."

The year-over-year comparisons in the same report did not roll TiVo's contributions into the 2015 period's results. Instead, the company measured its combined Q3 2016 results, which included three weeks' worth of TiVo contributions against Rovi's reported figures from the comparable quarter of 2015.

The merger lifted Rovi's bottom line out of red-ink territory. The company is hard at work making the most of synergies between the old Rovi and TiVo portfolios, slashing costs and cross-selling technology licenses wherever possible. Management has so far been mum on its outlook for fiscal year 2017, promising to to share its plans "in detail" when the fourth-quarter report is published in early February.