Shares of internet recommendation engine Angie's List (NASDAQ:ANGI) had another tough year, slipping 12% in 2016, according to data from S&P Global Market Intelligence. The stock dropped as the company continued to be unprofitable and revenue fell.

As the chart below shows, it was a volatile year for the stock, but it ultimately ended in the red. 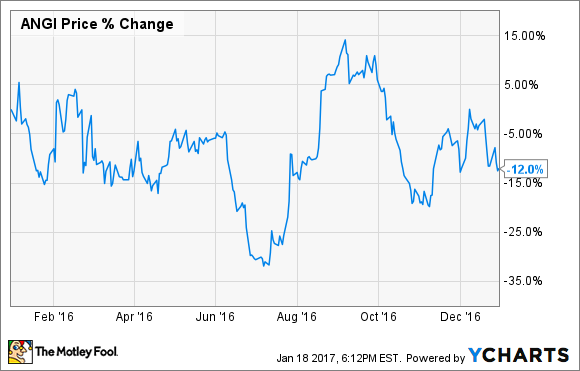 There was not much of a consistent explanation for Angie's List's movements throughout the year. The stock began by sliding in January alongside the rest of the market, and then tumbled on its fourth-quarter earnings report. Revenue increased 5% in the quarter due to improvements in the service-provider segment. However, earnings per share slipped from $0.26 to $0.24, missing estimates at $0.26.

Soon after, in March, the company said it would ditch its traditional membership program in favor of a tiered plan, which includes a free option to gain access to its business reviews. The decision was one of several initiatives it introduced at its investor day conference as it projected revenue of $345 million-$355 million for the year on breakeven free cash flow. Shares rose after its first-quarter earnings report in April even as earnings missed estimates and revenue was basically flat. However, membership was up 7%.

The stock then fell sharply in June, though there was little news out on it, but bounced back following its second-quarter earnings report, which beat expectations. It also said that scrapping its old membership requirement was paying off.

In October, it started falling again as Chairman of the Board John Chuang resigned and was replaced by Thomas Evans. The company reported another sharp loss in the third quarter, but it got a boost as it said it hired strategic advisors to explore options such as a sale. The year closed out with the stock ranging around $8 as the company looks set to hit only $325 million in revenue.

Investors begin 2017 hoping for a buyout, but Angie's List itself remains troubled. The company was founded in 1994, has been public for several years now, and is still not profitable. The stock is already down 9% thus far this year, even though the company recently touted that its membership passed 5 million, a 50% increase from a year ago.

Still, that has not persuaded analysts as most still expect Angie's List to post a loss in 2017. I see little reason to expect a comeback at this point.