On their conference call with Wall Street analysts, executives went into detail about the challenges and opportunities P&G experienced over the past few months. Here are a few of the key points that Chief Financial Officer Jon Moeller sought to get across to investors.

"Organic sales improved in five of six regions, 11 of the 15 largest markets, all five reporting segments, and in 9 of 10 product categories."

P&G posted 2% overall organic sales growth, which marked a decline from the prior quarter's 3% jump. However, that figure was impressive for a few reasons. First, it showed building momentum in a few key geographies. Organic sales have now improved for three straight quarters in the U.S. and in China, P&G's second largest market.

Second, the growth came despite economic challenges that the company did not anticipate, including currency disruptions in India and tough selling environments in Egypt, Turkey, and Argentina. Finally, the gains were volume driven, with volume rising a healthy 2% as pricing held steady.

"We said the new portfolio would grow up to one [percentage] point faster and over the first two quarters of this fiscal year, we're seeing that play out."

P&G finally has the portfolio that it has wanted for years, with the 66 brands it markets (down from 165) representing the fastest growing, most profitable franchises with the best long-term outlook for growth. CEO David Taylor and his team estimated last year that once the divestments are complete the new mix should produce one full percentage point higher organic growth. Shareholders should be encouraged by the early results showing that the brand-shedding process is finally starting to lift sales results.

"Core gross margin was up 120 basis points, including 210 basis points of productivity improvement and a modest benefit from volume growth."

Procter & Gamble is making significant improvements to its already market-beating profitability. The company cut nearly $10 billion out of its cost structure over the last five fiscal years and aims to remove another $10 billion through 2021. These shifts added three full percentage points to profitability, which was just partially offset by increased promotions.

P&G operating margin is 21%, putting it ahead of nearly all its rivals, including Unilever and Kimberly-Clark.

"FY17 is a year of significant value return to shareholders. We expect to pay dividends of over $7 billion. We reduced outstanding shares by $9.4 billion in the transaction with Coty and we expect to purchase over $5 billion of our stock. "

Investors were underwhelmed when P&G announced its smallest dividend raise in modern history last year, but the broader picture on cash returns tells a more positive story. Thanks to the funds it raised through selling off big brand franchises like Coty beauty products, the consumer goods giant is on pace to send $22 billion back to shareholders this year through a mix of stock repurchases and dividend payments. Investors should keep that in mind when judging the stock's performance. Sure, it has trailed the market by a wide margin over the last five years. But that gap disappears when you include dividends in the mix. 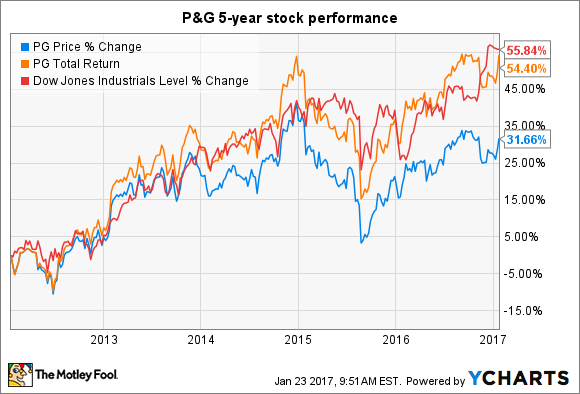 "Despite some significant and unforeseen challenges, we stand at the halfway mark of our fiscal year, essentially on track with where we hoped we would be."

Two quarters through the new fiscal year, P&G is optimistic about the business. In fact, executives raised their sales growth target to 2.5% from 2%, compared to the 1% uptick in 2016 and the flat result in the prior year. In part because of the economic challenges mentioned above, they left their earnings forecast unchanged. Still, the projected 5% profit uptick would be the first time in three fiscal years that P&G has hit its long-run earnings growth target.