Sometimes, in The Motley Fool's "Better Buy" series, it's not too difficult to identify the more attractive investment between two similar companies. In the matchup between health and fitness tracker leader Fitbit Inc. (NYSE:FIT) and GPS and wearables devices manufacturer Garmin Ltd. (NASDAQ:GRMN), the latter has a decisive edge, and I'll briefly substantiate why below. However, if you happen to lean toward value situations or have a speculative bent, you may still be inclined to take a position in Fitbit, so in this article, we'll also examine the contrarian case.

Why you should be in Garmin's camp

To begin, it's instructive to review how shares of each company have performed on a total return basis over the last 12 months. Note that Fitbit is at a slight disadvantage here, since it's a young growth company and as yet doesn't pay a dividend. Still... 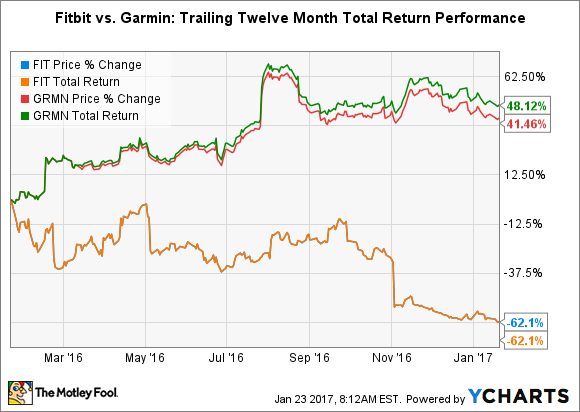 Garmin has appreciated 48%, recovering nicely from a 26% drop in 2015, while Fitbit, alarmingly, has lost 62% of its value, creating a 110% performance differential between the two tickers. Even if we trace back to Fitbit's IPO on June 18, 2015, we find a similar result. Garmin's returns aren't as bright over the one-and-a-half-year stretch, but Fitbit's trend line declines even further: 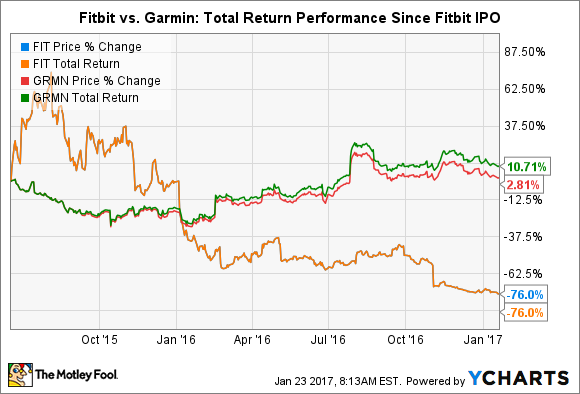 Since Fitbit appeared on the public markets, investors have worried about its ability to remain a leader in the fitness wearables market. Indeed, as competition intensifies, Fitbit's impressive revenue arc is beginning to flatten. In the first nine months of 2016, Fitbit's top line increased 39.2% versus the prior year. That's extremely rapid growth to be sure, but it's a marked slowdown from the revenue explosion of 205.5% the company posted in the first nine months of 2015 versus 2014.

For the yet-to-be released fourth-quarter 2016 earnings report, Fitbit's management has provided revenue growth guidance of just 2%-5%. But reports of a retail inventory buildup during the crucial 2016 holiday season may portend that even this meager projection is optimistic.

If Fitbit's market share in the wearables market is peaking, its reliance on hardware products and accessories in a single slice of that market -- fitness trackers -- makes it vulnerable to declining revenue and profits. Garmin, on the other hand, has gradually decreased a concentration in GPS automotive devices business, which once made it similarly vulnerable.

As recently as five years ago, Garmin's auto segment represented 58% of total revenue. Management's attention to expanding other traditional segments, as well as evolving the fitness segment, has resulted in a more stable mix of revenue streams today. The table below displays Garmin's top line through the first nine months of 2016:

Notice the decrease in auto's relative importance to the total pie, and how gains in other segments are absorbing its decline. Ironically, Garmin's overall growth, though tepid, is supported by its own momentum in the fitness segment, as its fitness trackers such as the vívoactive smartwatch are challenging the primacy of Fitbit's devices.

A caveat in this matchup

The price charts above will raise a compelling question in the minds of more than a few investors: What if Fitbit is oversold, and undervalued? Due to its relentless price spiral, the company's stock now trades at just 9.6 times forward one-year earnings, a 55% discount to Garmin, which sells at a one-year forward price to earnings ratio of 17.5. Similarly, Fitbit's current price to book value ratio of 1.4 is just over half of Garmin's ratio of 2.7.

To add to the sense that a bounce-back may be due, short interest in Fitbit at the end of 2016 stood at 35.44% of total float. Moreover, according to Business Insider, financial analytics firm S3 Partners estimates that in the first weeks of January, short interest has increased, reaching nearly 50% of the stock's float.

Fitbit will report earnings in the third week of February. If the company surprises shareholders with a stronger-than-expected fourth quarter of 2016, it's likely that shares will enjoy a quick pop, as short-sellers rush to cover their positions.

But for longer-term investors, it's more important to understand the outlook for the rest of 2017 than it is to try to buy shares now in the hope of an earnings-day windfall. Fitbit could slightly surpass earnings expectations while still showing evidence of inventory creep. Slow-moving inventory can eventually become more of a liability than an asset on the balance sheet, as carrying costs eat into profits and the specter of write-offs looms. In this scenario, possible tapering growth could quickly lead to the resumption of the stock's waning trend.

To be fair, Fitbit's management points out that the company will benefit from its expanding social fitness network, as well as opportunities in healthcare, such as an increasing presence in corporate wellness programs. But at present, the organization's fortunes are still disproportionately tied to its ability to sell hardware in physical and online retail environments.

Rather than committing before earnings, I believe it's better for sidelined investors to first fully understand the implications of fourth-quarter 2016 sales and assess management's 2017 outlook when earnings are released next month. If conditions are indeed turning around, there will be plenty of potential upside to participate in going forward. Or better yet, consider the slower-rising but more dependable shares of Garmin, which you can safely purchase today.