Last year was a big one for SunCoke Energy, Inc. (NYSE:SXC) and its controlled public limited partnership SunCoke Energy Partners, L.P. (NYSE:SXCP). The pair advanced 200% and 150% (or so), respectively. An improving outlook for the U.S. steel industry was one piece of good news, but a deeper analysis is needed to really understand the trends taking shape at these companies. Here's a quick recap of what you need to know to understand the potential 2017 holds.

Last year was a good one for U.S. steel makers, with steel prices and demand generally getting stronger as U.S. tariffs on foreign-made steel began to take hold. That's why shares of steel makers like AK Steel (NYSE:AKS) and United States Steel (NYSE:X) each rose more than 300% in 2016.

But there's an important distinction with this pair because blast furnaces underpin their businesses. Blast furnaces are expensive to run, and that can lead to material losses during lean years, which have pretty much been the norm in the steel industry in recent years. So, good news on the demand and price front can really be the difference between black ink and red. 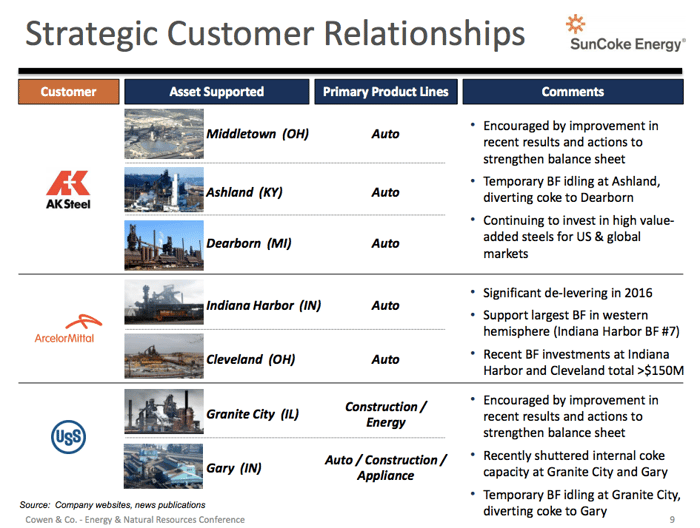 An improving U.S. steel industry is clearly a huge positive for SunCoke, but that's kind of the end of the story. There was a whole lot more going on at this company in 2016. For example, in the first half of last year, SunCoke exited the coal mining business with its "sale" of assets to Revelation Energy. It wasn't pretty; SunCoke actually paid Revelation $10.3 million to take the coal mines off its hands. But it got SunCoke out of the commodity business so it could focus on its more stable coke-making and transportation assets.

This is important for investors to understand. SunCoke is, after the coal sale, basically just a middle man. It gets paid to process coal into steelmaking coke and for transporting coal and other materials. That said, its top line will be affected by often-volatile commodity prices since it has to buy metallurgical coal to process it, but it just passes those costs through to its customers. SunCoke's customers, meanwhile, generally have take or pay contracts, which means SunCoke gets paid even if its customers don't want the material.

With the coal asset sale, SunCoke's business became a lot more stable. Then in late 2016, SunCoke Energy announced plans to buy SunCoke Energy Partners in an all-stock deal. That will bring the company's coking operations (SunCoke Energy) and its transportation assets (SunCoke Energy Partners) under one roof, simplifying the company's business materially. The deal is also expected to reduce expenses, increase SunCoke's cash flow, allow it to more aggressively reduce debt...and the company expects to initiate a dividend after the merger is completed. That's a long list of positives to look forward to in 2017, assuming the acquisition is approved. 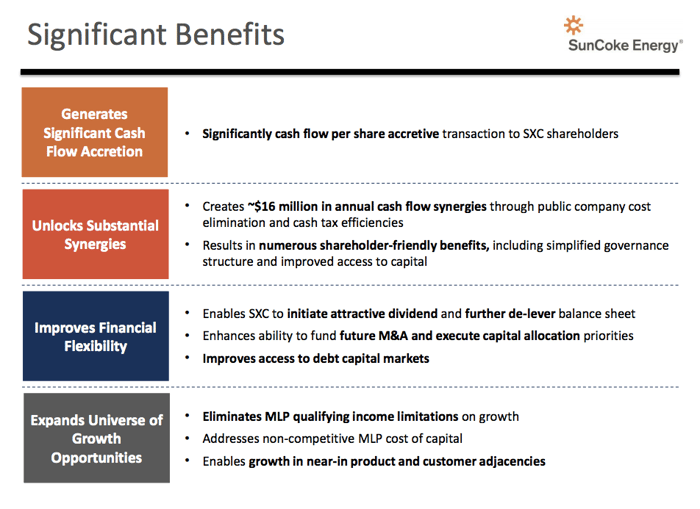 The underlying improvement in the U.S. steel industry is the big-picture news that helped push shares of SunCoke Energy and SunCoke Energy Partners higher last year. However, that was just one of the many things going on in a transformational year. The more fundamental changes in the business include the "sale" of its coal mining assets and the planned acquisition of SunCoke Energy Partners by parent SunCoke Energy, which will turn two into one. That last change is still to come in 2017, so there's clearly more for investors to watch, here.

If the deal lives up to the hype, it will mean an even more solid foundation from which to grow. Investors are likely to view that in a positive light. That said, the shares of SunCoke Energy are trading at a pricey 20.5 times tangible book value. In other words, if you are looking for a bargain SunCoke isn't a great fit for you -- It will need to meet and, perhaps, exceed high expectations from this point to justify that price.