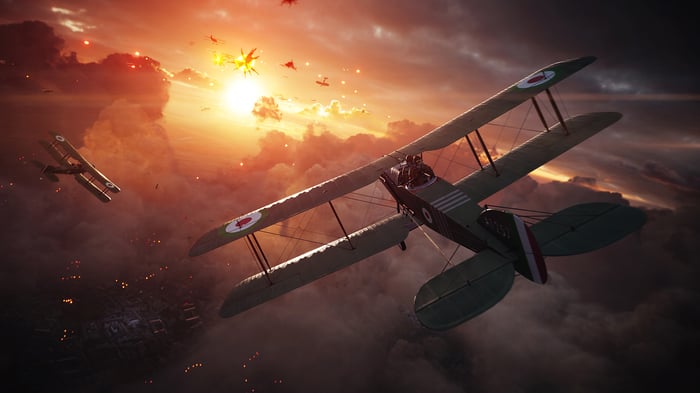 Electronic Arts' (NASDAQ:EA) Battlefield franchise will be taking a bit of a breather before its next installment, with management indicating that a sequel is at least two years away from release. The series' 2016 entry Battlefield 1 landed to great reviews and strong sales, and EA has delivered an entry in the property on a roughly annual basis, so word that a follow-up is farther out than usual points to a shift for the company.

The fact that a sequel to the company's Star Wars Battlefront, also a first-person-shooter, will be debuting in 2017 likely has a lot to do with the time-out for the Battlefield series, but the move might also be a reaction to a changing industry climate.

Standing out is getting harder

EA and Activision Blizzard (NASDAQ:ATVI) have long favored annualized installments for some of their biggest properties, and that schedule will remain the norm for sports games and certain other franchises, but a more staggered release schedule could become standard for many of gaming's core series. 2016 saw an abnormally high number of big budget games post disappointing sales, and a crowded market was likely a contributing factor. Activision's Call of Duty: Infinite Warfare reportedly sold somewhere around 50% less than the previous year's installment, EA's Titanfall 2 came up far short of expectations, and Ubisoft's Watch Dogs 2 sold poorly enough to make the viability of future entries questionable.

The first-person shooter genre is especially crowded at the moment, with other franchises including Destiny, Overwatch, Doom, and a long list of smaller properties all vying for the attention of the same core demographic. Releasing a new series entry every year is one way to keep a user base engaged, so long as publishers can keep up with the demands of delivering must-have experiences, but saturation can diminish the specialness of a franchise and speed its decline.

Is more time between franchise entries the right move?

While EA, Activision, and Ubisoft have favored yearly releases for many of their most important series, Take-Two Interactive (NASDAQ:TTWO) has taken the opposite approach with its marquee property Grand Theft Auto -- and to great effect. Five years passed between the release of Grand Theft Auto IV and the company's 2013 megahit Grand Theft Auto V, and the long development cycle enabled the company to ensure that the product was close to perfection upon release. A high level of quality control and attention to detail helped to make the game the series' best-selling installment ever, with roughly 70 million units shipped as of November, and paved the way for ongoing online engagement that has been hugely profitable for the company.

With game budgets climbing, the ability to increase a product's lifecycle through a combination of a strong core experience and downloadable content expansions can have a much bigger payoff than releasing annual sequels. This type of strategy is also employed by the Blizzard wing of Activision Blizzard, and it's a move that could have a big long-term payoff for Electronic Arts. Battlefield is one of the company's few blockbuster properties that does not depend on a license, so making sure that the franchise doesn't burn out and lose its specialness has added importance.

A digital revenue increase could be in the cards for Battlefield

Battlefield doesn't need to take the five-year development route employed for Grand theft Auto, but the series' quality would almost certainly benefit from longer development cycles, and that could go a long way to keeping players engaged and encourage spending on virtual currency and downloadable content. With Battlefield 1 being generally regarded as a high-quality product and the game's World War I setting giving it a notable point of distinction in comparison to competition in the genre, the game could be well-suited to transitioning the series to a different release model. Downloadable content expansions are already on the way, with the first update scheduled for release in March and additional major updates likely to follow.

EA generates roughly $1.3 billion a year from the sale of downloadable content expansions, with roughly half of that coming from its Ultimate Team card games for the FIFA and Madden series, and comments indicate that the company is working on a similar addition to Battlefield. If Electronic Arts can keep users engaged through updates and successfully introduce a digital card game component to the series' model, investors should welcome the move to space out future releases in the franchise.