Johnson Controls (NYSE:JCI) is set to report first-quarter earnings on Feb.1. It's easy to get flustered with the flurry of facts and figures that surround earnings season. So let's prepare by looking at some things we'll probably hear about when the company reports and how we could interpret them.

Completing its merger with Tyco last September, Johnson Controls has renamed its building efficiency segment, building technologies and solutions. When the company reports earnings, it will be the first full quarter that includes Tyco's contributions, affording investors the opportunity to see how well the integration is progressing.

Checking in on China

Whereas President Trump's skepticism about climate change and the Paris climate agreement is well known, the Chinese government has taken the opposite stance. According to The New York Times, China plans on investing more than $360 billion on renewable power sources through 2020. This commitment to, in part, reducing pollution affords Johnson Controls a considerable opportunity. The company is an industry leader in the smart-buildings market as well as stop-start battery technology -- both of which are attractive to advocates of clean energy.

Forecasting sales for the power solutions segment to grow 35% in 2017, management is already committed to seizing the market opportunity in China. The company -- building two new automotive battery plants -- is in the process of expanding its manufacturing capacity.

A worker assembles a battery at a manufacturing facility in China. Image source: Johnson Controls.

One facility is expected to begin production in 2018, while the other is slated to begin operations the following year.

Investors can look for references to China in the company's earnings release. In addition to confirming that progress on the new construction facilities in on schedule, investors can make sure that the company is meeting its estimates for growing sales in the country -- perhaps even upwardly revising its revenue estimates.

Besides focusing on the progress with Tyco and dealings in China, investors would be wise to check out the company's balance sheet. At the end of fiscal 2016, Johnson Controls had approximately $2 billion in cash on hand and net debt of $10.8 billion. Because of the recent restructuring of the business, this has translated to a debt-to-capital ratio of 40.4% -- the highest it has been in more than 10 years. 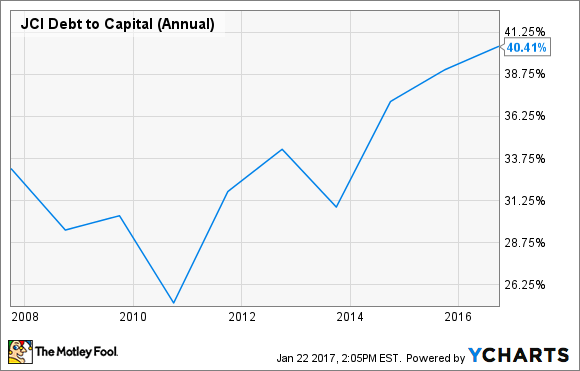 To maintain the strength of its balance sheet, management has identified a target between 35% and 40%, which, it contends, will afford the company "the flexibility to pursue growth opportunities." The high debt-to capital ratio is not a red flag per se, but it's something to monitor. It's never a bad idea to keep an eye on the balance sheet to confirm that the company remains in sound financial health.

Management is guiding for earnings per share between $0.50 and $0.52, but there's much more to a company's earnings than just one figure. It's important to look at the particulars. For one, investors should confirm that the building technologies and solutions segment is reporting healthy growth; likewise, the company should be reporting success in China. Though not critical to see improvement, the balance sheet should also be monitored to confirm that the company's debt is not becoming too much of a burden.