Hard drive builder Seagate Technology (NASDAQ:STX) reported results on Tuesday night, covering the second quarter of fiscal year 2017. It was a solid performance, and share prices jumped more than 12% in after hours trading.

What happened with Seagate this quarter?

PC systems may be going out of style, but Seagate is making up for that negative trend by selling large volumes of enterprise storage products and consumer-grade drives nestled in media storage or personal data backup devices. 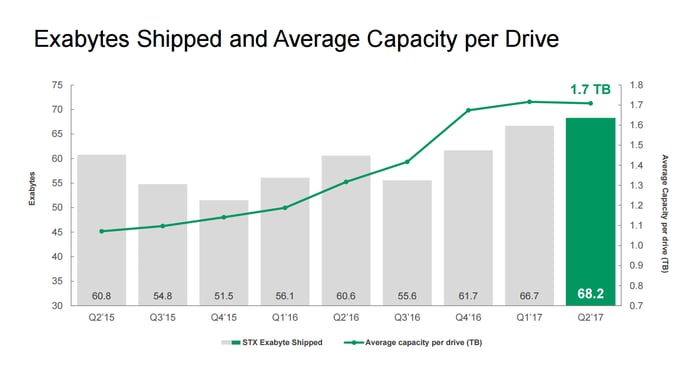 In a prepared statement, Steve Luczo congratulated his employees on a job well done and then set up a rosy view of the next few years.

"Looking ahead, we are optimistic about the long-term opportunities for Seagate's business as enterprises and consumers embrace and benefit from the shift of storage to cloud and mobile applications," Luczo said. "Seagate is well positioned to work with the leaders in this digital transformation with a broad market-leading storage solution portfolio."

Seagate is doing an excellent job of replacing its fading PC sales with high-quality revenue in the enterprise and consumer electronics markets. On the downside, management barely mentioned flash-based SSD products on the earnings call, and sales in that department remain forgettably small.

In other words, there's life in this old clunker yet but I am not completely convinced that Seagate has a sustainable uptrend going on here. As flash memory storage grows larger and cheaper, there will come a time when that solution becomes a viable alternative to Seagate's magnetic discs even for bulk storage situations. Manufacturing improvements and fiscal discipline can only go so far.

The clock is ticking, and I don't see Seagate hustling to get ready for the next era of data storage.