Skyworks Solutions (NASDAQ:SWKS) investors couldn't have asked for a better start to its fiscal 2017. A first quarter earnings beat and a stronger outlook for the ongoing quarter sent its stock soaring to new 52-week highs, as it rose over 13% in a single day.

For the fiscal second quarter, Skyworks believes that its revenue will grow 8% year-over-year to $840 million, exceeding the consensus forecast of $818 million, while earnings of $1.40 per share should significantly outpace analyst estimates of $1.24 per share.

Skyworks also delivered some solid long-term takeaways in its latest quarter. The company is now boasting of design wins at high-volume smartphone companies in China, as it is growing its revenue outside of Apple (NASDAQ:AAPL). Still, Apple reportedly contributed 40% of Skyworks' top line in fiscal 2016.

However, the company has been gradually working toward winning more business from other clients, and it has found some success.

Skyworks' business outside of Apple increased 8% in the last fiscal year, as Vivek Arya of Merrill Lynch pointed out on the latest conference call. Though this might not seem really big right now, the fact that overall revenue fell 1.3% year-over-year in the first quarter makes the growth beyond Apple a crucial factor for long-term success.

In fiscal 2015, Apple was reportedly 44% of Skyworks' business. Thus, it can be assumed that of Skyworks' total revenue of $927 million in the first quarter of 2016, Apple contributed about $408 million of that. By comparison, the smartphone giant should have contributed $366 million to Skyworks' revenue (40% of $914 million) in the most recently reported quarter. This indicates that revenue from Apple fell about 10% year-over-year.

That indicates Skyworks' growth from other clients powered its revenue and earnings beat last quarter. This is why Skyworks needs to aggressively pursue client diversification if it wants to mitigate the slowdown in business with Apple.

Diversifying in the right areas

Skyworks Solutions is building an army of clients in China. One of the most prominent names is Huawei. The company has been supplying its SkyBlue technology to the Chinese smartphone maker for its flagship Mate 9 smartphone. In fact, according to Skyworks CEO Liam Griffin, Huawei is now the company's second biggest client.

This is a big deal for Skyworks since Huawei is now a formidable name in the smartphone industry. According to the latest data available from IDC, Huawei's smartphone market share stood at 9.3%, trailing Samsung's 21% share and Apple's 12.5% share in the third quarter of 2016. More importantly, the Chinese smartphone giant has been selling more of its high and mid-range phones, which account for 57% of its total shipments.

The higher average selling price, along with higher volumes, is good news for Skyworks since it will be able to enhance its dollar content in Huawei devices, which are in turn enjoying higher selling prices. Market research firm TrendForce points out that smartphone production will increase 4.5% this year to 1.4 billion units. Chinese smartphone companies will account for 634 million units of this production, with Oppo, Vivo, and Huawei being the biggest names. As Skyworks counts all three of them as clients, it will witness a rise in chip sales this year as the top Chinese smartphone companies are expected to sell 39% more phones in 2017 as compared to 2016.

Therefore, higher component demand by Chinese companies to make more smartphones will push up Skyworks' average selling prices, since it should be able to charge a premium in the wake of tight supply. Skyworks can also make up for the volumes that it is losing due to Apple's slowing iPhone sales, as it can now sell more components to Chinese smartphone makers. 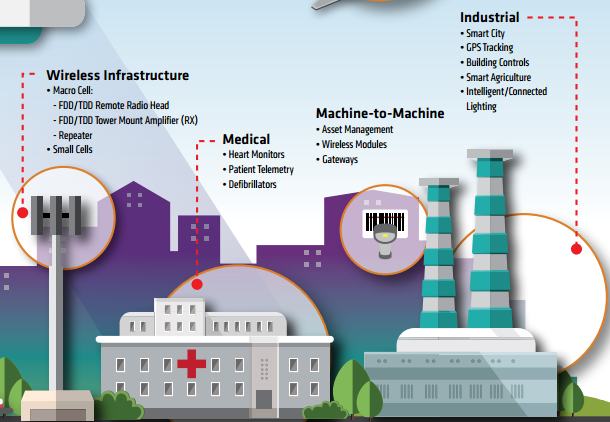 The great thing about Skyworks is that it is pursuing opportunities beyond mobile as well. The Internet of Things, or IoT, is one such opportunity where the company is aggressively enhancing its presence by launching new offerings.

Skyworks released new front-end connectivity modules for machine-to-machine connectivity and IoT operations a few weeks ago. With its latest IoT product, Skyworks should be able to accelerate the deployment of IoT applications by encouraging migration from 2G networks due to its low cost and compact packaging.

This product development move by Skyworks is a smart one, since the number of cellular devices communicating with each other will rise from 300 million at present to around two billion by 2020, according to GSMA. As the number of machine-to-machine connections increases, Skyworks' connectivity modules that enable the IoT will gain more traction and lead to higher shipment volumes.

However, the company does not single out its revenue or shipments from the IoT segment, or any segment for that matter. But the sheer growth in the size of this market, coupled with the company's product development efforts, should prove to be a tailwind in the long run.

Skyworks revenue is expected to increase 8.7% in the current fiscal year, followed by stronger growth of 10.5% next year. It appears to be pulling the right strings to diversify its revenue away from heavily concentrated clients such as Apple, which seems to have hit its own roadblocks. As a result, Skyworks is well-positioned for long-term success as it focuses on markets that have significant room for growth versus areas approaching saturation.