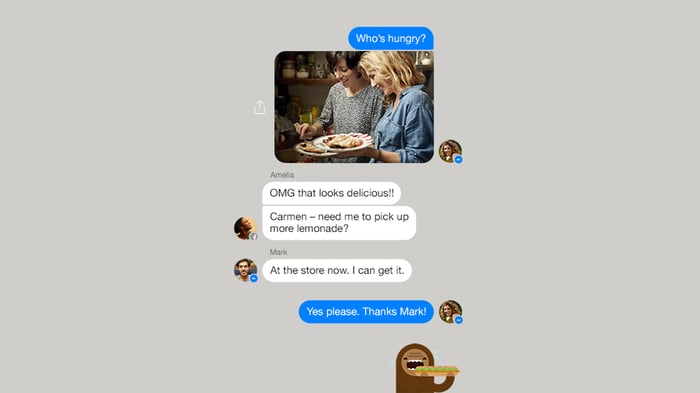 After a couple of years of actively looking for ways to monetize Messenger, Facebook (NASDAQ:FB) is testing out a tried but true method to app monetization: banner ads. The company recently launched a small test of display ads on the Messenger home screen, just below users' favorite contacts. A handful of users in Thailand and Australia will start to see the ads over the coming weeks.

Facebook has worked to increase the interaction between users and businesses on Messenger for several years, most notably introducing chatbots. CEO Mark Zuckerberg says that's a key phase before monetization. But Facebook is pressing on the gas with Messenger because of constraints in its ad supply on its flagship platform. Messenger may be able to handle the overflow of demand for Facebook ads if the tests prove successful.

Tencent (OTC:TCEHY) has benefited greatly from the popularity of WeChat, a messaging app used widely in China and other parts of Asia. It's leveraged WeChat into a huge revenue source via payments, Facebook news feed-like advertisements, official business accounts, and a whole app ecosystem built on top of the messaging platform.

Facebook has tried to mimic some of WeChat's functionality. It introduced payments and integrated services from third parties like Uber. It made an app store specifically for Messenger, and chatbots are an extension of that app format. But nothing has really moved the needle for Messenger like it has for WeChat. North America and Europe -- where Facebook is most dominant -- already have well-established app ecosystems, so there's no need for one app to rule them all, as in China.

The company has some of the best ad-targeting data in the world. Messenger ads will use the same targeting data as Facebook and Instagram ads. Note that Facebook will not scrape data from users' private conversations on Messenger.

An example of the new ads in Messenger. Image source: Facebook.

Facebook's strength in ad targeting should result in better ad performance than WeChat's early attempts at banner advertising. WeChat originally introduced advertising in 2014 with the most basic targeting options -- gender, location, age, and so on.

Facebook has started building up demand for a news feed ad product that allows users to click and start messaging the business right away. Those kinds of ads would fit perfectly into Messenger, so Facebook has already laid some extra groundwork to ensure better conversions.

Still, it's unknown whether users will respond well to ads in Messenger like they have to ads in Facebook and Instagram feeds. A carousel of display ads doesn't really fit into the app; it's very inorganic and easily identified as an ad.

Overall, however, it provides Facebook with a potentially much larger advertising supply than Sponsored Messages -- its first attempt at advertising in Messenger. Businesses could only advertise to users that had initiated a conversation with them first. That substantially limited the scope of the ad product. The new ad carousel could potentially display ads to everyone.

Facebook needs to get the ball rolling on Messenger

During the company's third-quarter earnings call, CFO Dave Wehner warned investors that he expects ad revenue growth to "come down meaningfully" due to saturation of Facebook's ad load in news feed. Simply put, Facebook can't squeeze any more ads into its most popular product.

Meanwhile, Instagram's ad revenue growth has been outstanding. Analysts at Credit Suisse expect it to generate $6.4 billion this year, double its revenue from last year. However, the analysts expect growth to slow significantly after this year, reaching just $12 billion by 2021. In other words, Instagram will see more absolute revenue growth in its first two years of monetization than in the next four.

With 1 billion users on Messenger, the platform represents a huge opportunity for advertisements. And while the advertising real estate may be smaller on the chat app, there's still billions of dollars in annual revenue for Facebook to squeeze out of Messenger. As growth slows for both Facebook and Instagram, Messenger will have to pick up the slack in the next few years.