What a year and a half it's been for Volkswagen Group (OTC:VWAGY) and its investors. After news broke in late 2015 of its diesel emissions scandal that covered roughly 11 million cars, there was swift consumer backlash. The damage was significant enough to help drive Volkswagen's global sales down 2% during 2015, despite only a couple of selling months remaining after the details emerged.

The company was investigated, executives were fired while some resigned, tens of thousands of employees were laid off, and even Volkswagen dealers felt cheated. Total costs for the entire scandal have been estimated to stretch to nearly $20 billion in the U.S. alone.

The question was how bad it was going to get in 2016. The answer turned out to be surprising to many; Volkswagen's global sales rebounded 3.8% to 10.3 million vehicles, taking the global sales crown away from Toyota Motors (NYSE:TM). Go figure.

There were a couple of factors that led Volkswagen to dethrone Toyota after the latter claimed the global sales crown in each of the prior four years. One reason was the reaction in different markets. While the scandal cost the automaker significantly in the U.S., the truth is America is one of the smaller Volkswagen markets. As a German automaker, European consumers might have been more forgiving about the situation and quicker to return to the brand. Most of all, China, which generates roughly 40% of its total sales, doesn't buy many Volkswagen diesel vehicles and was largely apathetic to the scandal; the automaker's sales in the region surged 12% to nearly 4 million vehicles in 2016.

You can even see the slowly improved cadence in year-over-year gains throughout 2016. 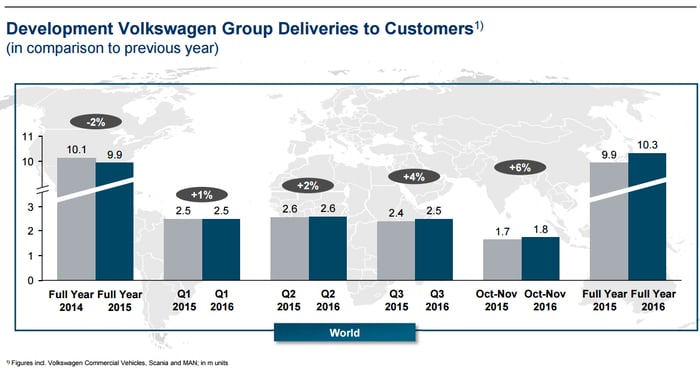 On the flip side, Toyota's sales increased a lesser 8% in China, to a far lesser 1.2 million vehicles total. That result was the weakest of its Japanese competitors, Honda and Nissan, which posted total sales in China of 1.25 million and 1.35 million, respectively. At a time when the U.S. sales market was peaking and Volkswagen was expanding rapidly in China, Toyota couldn't match its German competitor for global 2016 sales.

"The development of the U.S. market is set to decide if VW can stay ahead of Toyota this year," Sascha Gommel, a Frankfurt-based analyst at Commerzbank AG, told Bloomberg. "If the Chinese and European markets continue to be solid and the U.S. market weakens as I expect, VW might stay first in 2017, as Toyota has a larger exposure to North America."

Beyond that, Volkswagen is starting to accelerate the design and production of more popular SUVs to try to get a better foothold in America, its last major market catalyst, as well as hold its gains in China. 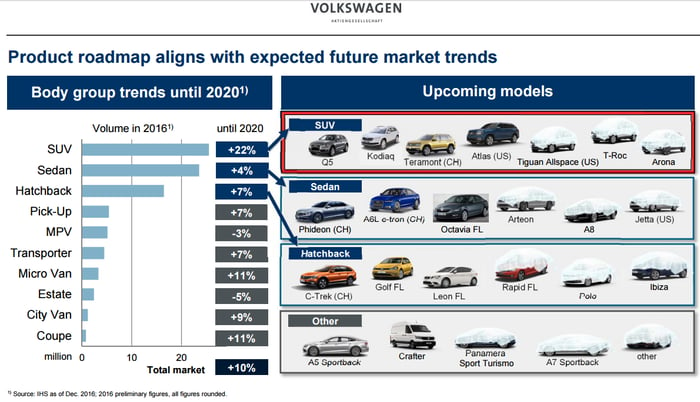 Ultimately, it appears the world has already shaken off the diesel emissions scandal, which has historically happened with other automakers' major scandals, recalls, and other debacles. If the automaker continues to dominate in the world's largest automotive market, China, and perhaps even create a foothold in the U.S., it might be tough for Toyota to reclaim its sales crown anytime soon.