Like most shale drillers, Eagle Ford-focused Sanchez Energy's (NYSE: SN) stock got crushed when oil prices crashed, plunging a nauseating 87.5% from mid-2014 to the end of 2015. However, Sanchez Energy came roaring back in 2016, as a combination of rising oil prices and an improvement in its costs and liquidity fueled a more than 100% rebound: 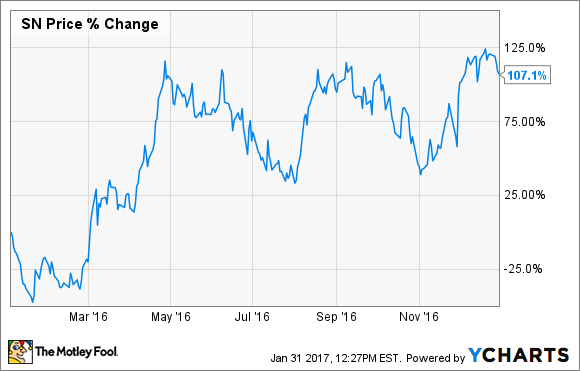 That rebound has continued in 2017 and could have even more room to run, given what Sanchez Energy sees on the horizon.

While oil prices had not yet found their bottom, Sanchez Energy entered 2016 with the wind at its back. That was after the company closed the sale of some non-core assets in late 2015, bringing in $345 million in cash. That money would more than cover Sanchez's planned capital expenditures budget of $200 million to $250 million, which was enough capital to keep its production flat at 2015's record level.

Sanchez Energy continued to build upon that improving foundation throughout the year by selling several additional non-core assets. In July, it sold its 50% interest in an under-construction gathering system to its MLP Sanchez Production Partners (NYSEMKT: SPP), for $44 million in cash plus relief from future capital requirements. It followed that up with a sale of its 50% interest in an under-construction processing plant to Sanchez Production Partners for another $47.7 million cash payment and more funding relief.

In addition, it sold several non-core acreage packages. Its largest transaction was the sale of some non-core Eagle Ford shale assets to Carrizo Oil & Gas (NASDAQ:CRZO) for $181 million. These deals boosted the company's cash position up to $525 million, which along with another $300 million in available credit, provided Sanchez with a war chest to use in pursuit of an accretive acquisition.

Meanwhile, the company's operations performed exceptionally well last year. During the third quarter, for example, production averaged 51,500 barrels of oil equivalent per day (BOE/D), which was at the high end of the company's guidance range of 50,000 to 52,000 BOE/D. In addition, drilling costs continued coming down, to below $3 million per well during the quarter. As a result of those falling drilling costs, the company estimated that it had 350 future drilling locations in the upper Eagle Ford alone that could earn returns of more than 50% at current commodity prices.

Sanchez Energy's stock has continued to run higher in 2017 and is up nearly 50% since the start of the year. Fueling that surge is the announcement that the company found an exceptional place to put its liquidity to work. In mid-January, the company unveiled a strategic partnership with a private equity giant, Blackstone Group (NYSE:BX), to acquire Anadarko Petroleum's (NYSE:APC) Eagle Ford shale assets for $2.3 billion. Under the terms of the deal, Sanchez and Blackstone entered a 50-50 partnership to own the Anadarko assets, which consist of 155,000 net acres that currently produce 67,000 BOE/D and hold more than 4,000 drilling locations that are economic at current prices. Sanchez will finance its share of the deal with cash on hand, a new bank lending arrangement, and a preferred equity issuance to Blackstone's credit arm.

The transaction is a game-changer for Sanchez Energy. Not only does it significantly boost current production and cash flow, but it also provides the company with a clear path for future growth. In fact, Sanchez Energy believes the deal will enable it to grow production to more than 100,000 BOE/D within cash flow over the next 12 to 18 months, or by roughly 17.5% from its pro forma rate.

Sanchez also announced this year that it had quietly leased another 110,000 net acres in the Eagle Ford. As a result, the company has increased its Eagle Ford shale position from 200,000 net acres at the end of 2015 to more than 335,000 net acres, vaulting it to the third-largest acreage holder in the Eagle Ford, up from eighth before these transactions. Overall, Sanchez expects this acreage position to fuel 10% compound annual production growth over the next three years, more than double its EBITDA (earnings before interest, taxes, depreciation, and amortization) by 2018, push its leverage ratio down below 3.0 by next year, and start generating significant free cash flow in 2018 and beyond. These improving financial metrics, thanks to a growing stream of profitable production, should give Sanchez Energy's stock the fuel it needs to continue heading higher as long as oil prices cooperate.

Sanchez Energy has undergone a remarkable transformation over the past year. It jettisoned non-core assets and used that cash to significantly enhance its core position, turning it into a leading Eagle Ford acreage holder. That position should fuel significant growth over the next few years within cash flow at current commodity prices, which alone should push the stock higher. Meanwhile, if oil prices rise, Sanchez's momentum could accelerate.

This Oil Stock Doubled in 2016, and Still Has Plenty of Room to Run @themotleyfool #stocks $APC $BX $CRZO Next Article
Current