Please ensure Javascript is enabled for purposes of website accessibility
Log In Help Join The Motley Fool
Free Article Join Over 1 Million Premium Members And Get More In-Depth Stock Guidance and Research
By Lee Samaha – Updated Feb 1, 2017 at 10:02AM

An analysis of the package delivery giant's earnings and what went wrong in the quarter.

E-commerce growth doesn't come free. That's the key conclusion from United Parcel Service, Inc's (UPS -1.39%) fourth-quarter earnings report. In common with key rival FedEx Corporation (FDX -1.07%), UPS' latest earnings were something of a disappointment. Let's take a look at them and at what to expect from UPS in 2017.

The headline numbers for the full-year 2016:

Earnings came in below the midpoint of guidance. Turning to the all-important headline guidance for 2017:

Clearly, UPS is preparing for a year of increased revenue in 2017, but it's coming with margin pressure and increased capital expenditures. If that all sounds familiar, that's because it's pretty much what FedEx said on its second-quarter earnings presentation.

What happened in UPS' fourth quarter

The similarities to FedEx's recent earnings continue when you look at a breakout of UPS' segment performance.

As you can see, the U.S. domestic package segment experienced strong revenue growth, but a combination of issues caused the segment's adjusted operating income to fall. On the earnings call, CEO David Abney outlined them as follows: "[D]uring the quarter, we experienced a significant shift in mix toward lower-revenue products. This, combined with the cost of facility investments yet to come on line, weighed on our Q4 results."

In truth, the issue of negative shift has been brewing -- particularly for the peak delivery season -- and UPS and FedEx have both taken steps such as wide-scale adoption of dim-weight pricing (meaning packages are priced by dimension as well as weight) and lowering the length threshold at which additional handling surcharges come into play.  In addition, both companies are hiking prices in 2017.

It's not a problem of revenue growth, but rather one of ensuring profitable growth. For example, UPS ground revenue (which contributes more than 70% of U.S. domestic revenue) grew 7.1% in the fourth quarter, while ground average daily package volume grew 5.4% compared to the same quarter last year.

Unfortunately, Abney noted that increased cost of facilities weighed on the bottom line, and FedEx said a similar thing in its results. Moreover, UPS' forecast of $4 billion in capital expenditures for 2017 implies that 6.2% of revenue will be spent, a significant increase on the 10-year average of 4.3% -- a further sign of the increased burden of servicing e-commerce growth. 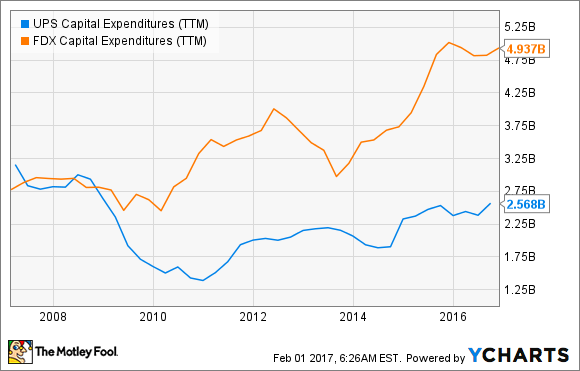 Meanwhile, supply chain and freight continued to struggle with a weak industrial economy, with CFO Richard Peretz noting, "[T]he Forwarding and Freight units remain challenged by overcapacity in the market." 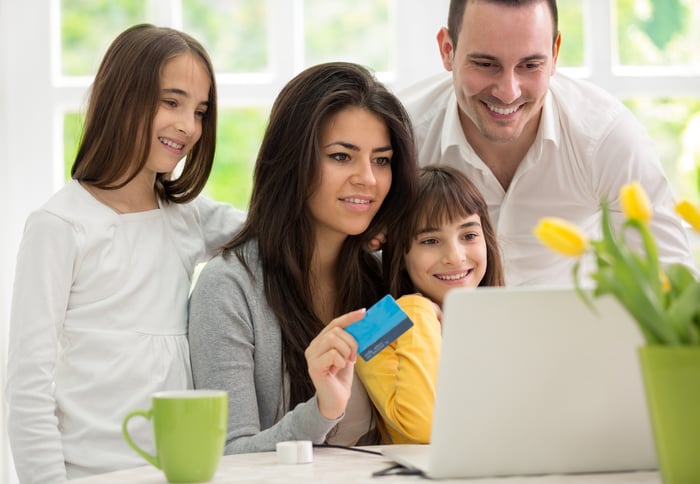 The most recent reports from UPS and FedEx haven't been good ones. Both companies are seeing margin compression and extra costs of dealing with e-commerce growth. However, as we've seen, measures are in place to adjust consumer behavior and also to maximize profitability. Meanwhile, UPS' supply chain and freight segment should benefit from what most commentators expect will be a stronger industrial economy in 2017, and the international package segment continues to impress. It's all up for grabs in 2017, even if the e-commerce game appears to be getting harder.

3 Top Industrial Stocks to Buy With $100