The U.S. solar market has moved away from massive solar farms in recent years, favoring smaller developments that plug into the grid a little more easily. But international markets aren't shying away from giant solar projects, particularly in desert locations.

The latest headline-grabbing project is a 1.18-gigawatt (GW) solar farm in the United Arab Emirates, which is moving closer to contract signing. To put that into perspective, 1.18 GW is enough to power 193,520 homes, or maybe more given the solar resources in the UAE. If completed, this would be a big win for the solar industry overall. 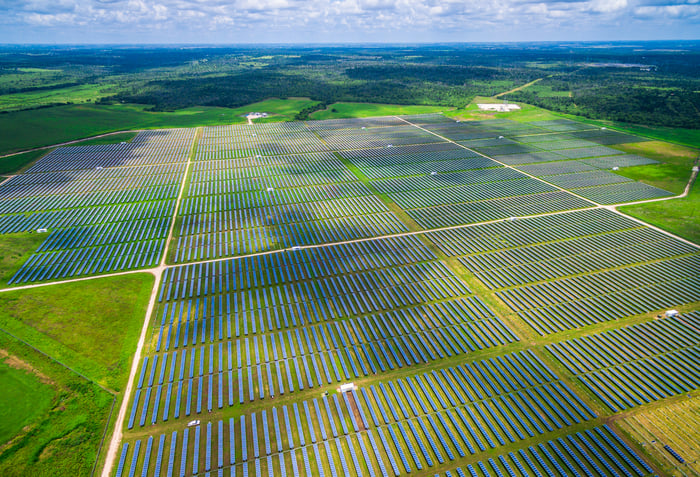 According to early reports, Japanese firm Marubeni is the main planner of the 1.18 GW solar farm and will eventually finance 20% of the project. The Abu Dhabi Water & Electricity Authority will own 60%, and JinkoSolar (NYSE:JKS), which will provide solar panels, will own the remaining 20%. If all goes to plan, the plant will be online in 2019.

The impact of such a project shouldn't go understated. This is the equivalent of about 1.7% of all solar installations in 2016, which are currently estimated at about 70 GW, and is 18% of JinkoSolar's guided module shipments of 6.6 GW to 6.67 GW for 2016. In one project, the company could have demand for over two months' worth of solar panel production.

First Solar (NASDAQ:FSLR) held the title of largest solar farm for a while with the 550-megawatt (MW) Topaz Solar Farm in California. But last year India completed the 648 MW Kamuthi solar farm and it has said it plans to build 25 solar farms between 500 MW and 1,000 MW in size. If true, the large-scale solar business has a better outlook than just a few years ago.

Will this provide an opening for long-duration energy storage?

This all makes me wonder how countries like the UAE and India will handle all of this solar. A cloud, or sunset, can take multiple GW of power production offline, which would require a quick ramp of oil, natural gas, or coal power plants -- unless these solar farms are accompanied with energy storage.

As solar adoption grows in developing countries and the cost of energy storage comes down, we may see energy storage accompany more solar power plants. Batteries can supply short duration energy, which would smooth out supply drops from clouds or sunset, but long-duration energy storage may become viable as well. Flow batteries, hydrogen, and pumped hydro are just a few of the options for taking daytime solar energy and storing it for night and even different seasons.

No matter how you look at it, fossil-fuel-heavy countries expanding into solar energy in a big way is very telling for the future of solar. And it'll make for a bigger opportunity for solar developers around the world.