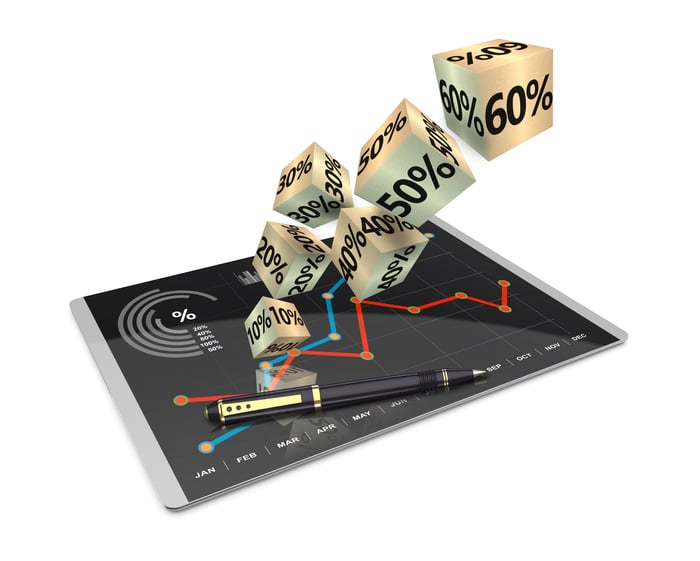 Though cash is king in business and investing, successful publicly traded companies also tend to be highly profitable on an accounting basis as well. Where there's one, you often find the other. Here's a quick overview of two large-cap stocks that are set to see their profits rise meaningfully in the year ahead:

Of course, profit growth is only one facet of the investment narrative for Kraft Heinz (NASDAQ:KHC) and T-Mobile US (NASDAQ:TMUS). To get a better sense of whether these names deserve further research on your part, let's examine each company in greater detail.

The future looks bright, in 2017 and beyond, for the $137 billion love child resulting from the 2015 merger of consumer-staples giants Kraft and Heinz. The company figures to be an earnings growth powerhouse in the years to come, as it continues to realize its merger-related synergies. In fact, the company reaffirmed its plans to shave $1.5 billion in costs from its business model  by the end of 2017, according to its most recent earnings release. This kind behavior is typical of the culture at the new Kraft Heinz, in which Warren Buffett's Berkshire Hathaway and the Brazilian private equity firm 3G Capital both own large minority stakes. A favorite saying of 3G co-founder and billionaire  Carlos Sicupira is that "costs are like fingernails; you have to cut them constantly."

This dedication makes Kraft Heinz a safe bet to continue to compound its earnings growth and dividend payments over the long term. Management's dedication to continued cost savings should indeed come as a relief amid a tepid outlook for revenue growth. Sales are projected to decline 0.6% this year and only increase a mere 1.6% next year. In terms of its valuation, the company trades at 22.7 times its consensus 2017 earnings estimates. Taking into account its 2.7% dividend, its focus on long-term earnings growth, and its reasonable valuation, Kraft Heinz presents an intriguing opportunity for investors in the consumer-staples space today.

The fastest-growing company among major U.S. telecoms, T-Mobile has kept proving doubters wrong in recent years. Branding itself as the customer-centric foil to larger incumbents AT&T (NYSE:T) and Verizon Communications (NYSE:VZ), T-Mobile has gained market share in 14 consecutive quarters and delivered some impressive earnings growth in the process. Thanks to its continued execution, T-Mobile's revenue increased 18%, net income rose 165%, and earnings per share climbed 180% in its most recent quarter.  More encouraging still, the company appears poised to build off this momentum in the year ahead. The average of sell-side analysts currently rates T-Mobile stock as a buy, calling for sales to expand 15.1% in 2017 and a further 9.4% in 2018.

Despite all its successes, though, it's important to note that T-Mobile and Sprint face important size disadvantages against their better-heeled rivals. AT&T and Verizon enjoy customer bases roughly twice the size of T-Mobile and Sprint. The annuity-like nature of the telecom market allows AT&T and Verizon to generate significantly higher cash flows, which in turn enables them to more easily invest in future growth initiatives. For example, Verizon has spent nearly $10 billion to acquire mobile content and advertising businesses in AOL and Yahoo! What's more, recent rumors of a discussed merger with Charter Communications implies that Verizon might continue to aggressively engage in M&A to shore up its future competitive positioning. AT&T has already done just that by agreeing to buy Time Warner, which should help the company lead the continuing shift in content consumption flowing through mobile devices.

Competing against these offerings will be a tall order for T-Mobile. However, the company has repeatedly proved itself to be the most entrepreneurial player in the U.S. telecom market, which is arguably entering an entirely new era -- one in which it isn't clear whether T-Mobile will be able to as easily fuel its growth by prying away customers from AT&T and Verizon in the medium term. As its sizable earnings growth this year signals, though, betting against T-Mobile tends to be a losing proposition as well.