In C.H. Robinson Worldwide's (NASDAQ:CHRW) fourth-quarter 2016 results, reported on Jan. 31, positive volume growth was challenged by margin compression, particularly within the North American truckload market. Below, we'll examine this and other highlights, after first taking a bird's-eye view of the quarter's financial results. 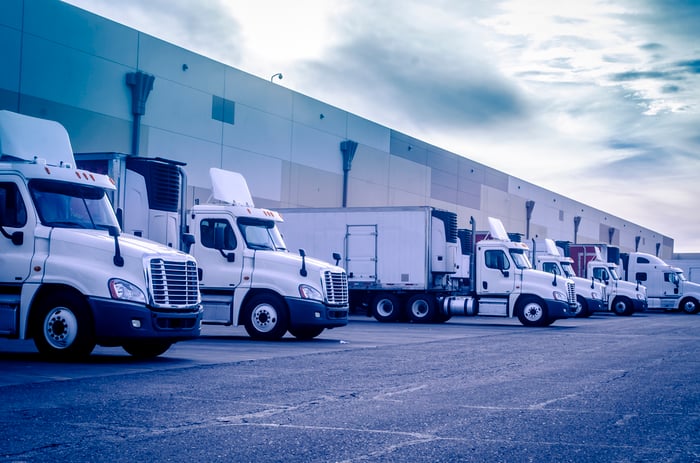 During C.H. Robinson's post-earnings conference call with analysts on Feb. 1, CEO John Wiehoff addressed a primary question in the minds of shareholders -- the state of the truckload business at the outset of 2017:

Obviously, it's very early in the year and the quarter, but so far, we have seen a continuation of good volume growth offset by truckload margin compression. We know that we will continue to have challenging comparisons on truckload margins for the first half of 2017, and we also expect meaningful bid and pricing activity in the months ahead. We've managed through these cycles before, and we're confident the network will do a good job adapting to the market conditions.

Wiehoff's comments provide for the possibility of some recovery in truckload net revenue during 2017, but his ambiguity is unmistakable -- it's too early to call for a trend reversal just yet.

The organization's CFO, Andy Clarke, may have offered a slightly more optimistic view during the earnings call. Clarke reminded analysts that during the first two quarters of the year, the company is traditionally occupied with responding to customer bids. The CFO revealed management's expectation that carrier costs would rise in 2017, which in turn should lead to firmer customer pricing for C.H. Robinson.

Bid pricing which improves alongside volume would be a positive change from 2016, when the two headed in opposite directions. Looking ahead, then, to first-quarter 2017 results in May, investors should focus on management's initial readings of contract pricing for the year: It will take both price and volume expansion for net revenue to begin to rise again.