The retailer is running out of financing options, and the bottom line has been printed in red ink for years. There's not much more than bubblegum and duct tape holding this sinking ship together.

Shares of Sears Holdings (SHLDQ) fell 24.9% in January 2017, according to data from S&P Global Market Intelligence.

The storied retailer is running out of shareholder confidence. January started with Sears taking out loans from a hedge fund managed by Eddie Lampert, the company's own chairman and CEO. Other lenders seem unwilling to bet on Sears actually paying off new debts. 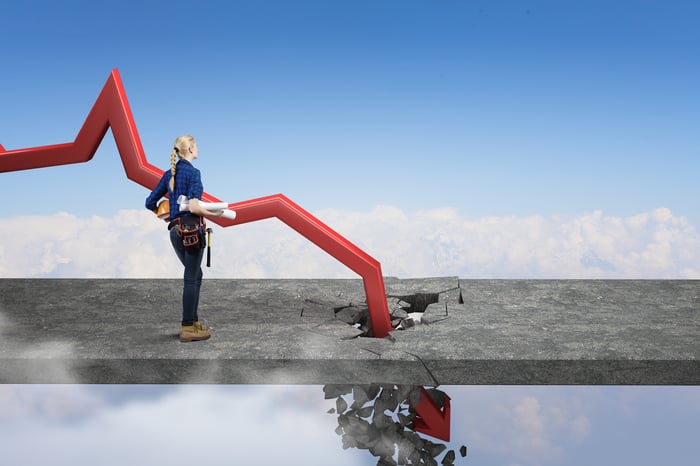 Then, the company announced the sale of its Craftsman tool brand to Stanley Black & Decker (SWK -1.48%), bringing in $900 million of much-needed cash. Even so, these financing moves failed to impress the credit bureaus, and Sears' credit rating took a hit in late January. In fact, Fitch Ratings has lowered Sear's unsecured credit rating to CC -- a "highly vulnerable" state, just a click or two away from bankruptcy.

Sears has been burning cash in each of the last five years, while annual sales tumbled 43% lower and shareholders have lost 92% of their early 2012 holdings. The company failed to compete against e-commerce specialists, and management is now too busy selling the furniture to attempt any positive changes to the collapsing business model.

Investors should stay far away from this imploding ticker. There is no soaring turnaround on the horizon, no last blue light special, and no reason to bet on a bounce.