2016 was an interesting year for Suncor Energy (NYSE:SU). The wildfires in Fort McMurray resulted in a huge setback, but the company was able to overcome the challenges to post an overall solid year with large production growth and solid earnings. All of these things have set the company up well for 2017, and management sees the next year or two as some of the best times for Suncor, even if oil prices don't rise much from where they are today.

Here's a quick look at the numbers from Suncor's most recent results and what investors should make of this company for the coming years. 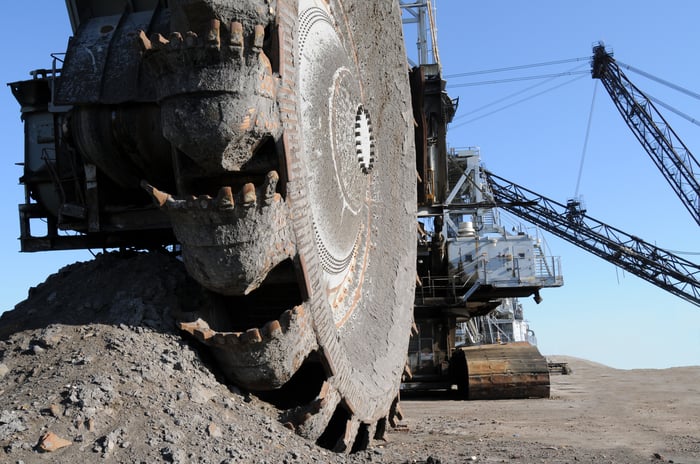 DATA SOURCE: SUNCOR ENERGY EARNINGS RELEASE. FIGURES IN MILLIONS, EXCEPT PER SHARE DATA. RESULTS REPORTED IN CANADIAN DOLLARS WERE CONVERTED TO U.S. DOLLARS BASED ON FOREIGN EXCHANGE RATES FOR THE GIVEN QUARTERS PROVIDED BY SUNCOR IN THE EARNINGS RELEASES.

The past two earnings results were what you could call the cleanest we have seen in a while from Suncor: There aren't several one-time charges or impairments. As a result, we got to see some of the impacts that the company's cash-cutting efforts have had on both an operational and an earnings basis.

One of the most promising things in these results is the gains in earnings from its oil sands segment. There is no doubt that oil sands is a huge production source for Suncor, but there have always been doubts that oil sands could actually produce a decent return. After all, oil sands is a higher-cost source and the high cost of transporting oil sands from Alberta to its end market means that margins can be low.

Despite this, the company was able to actually produce decent earnings from this segment thanks to significant cost-cutting. Cash costs per barrel for its oil sands business (ex-Syncrude) were $18.97 per barrel, and its Syncrude production costs were $24.75 per barrel. Seeing those kinds of cash costs really makes one wonder if oil sands is really a high-cost oil source. 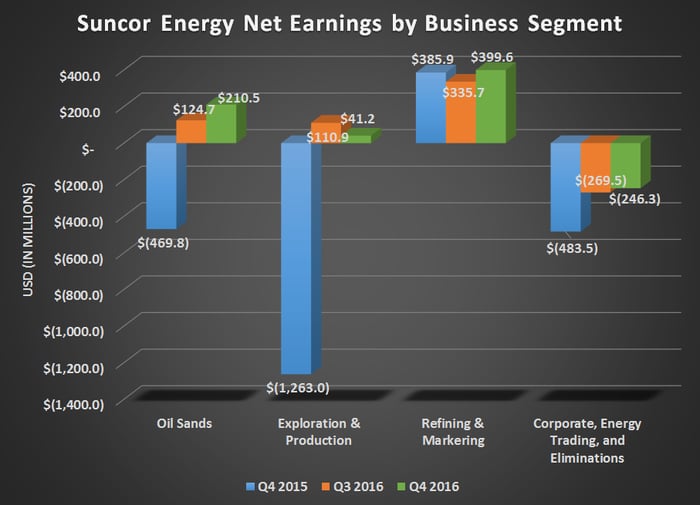 CEO Steven Williams spoke on the earnings call about Suncor's progress on bringing new projects on line and what that means for its strategic plans and shareholder returns for the coming year:

[O]ur existing operations are performing well, and our growth projects are on track with Syncrude outperforming expectations, and Fort Hills and Hebron on target to produce first oil by the end of this year. With lower levels of plant maintenance across Suncor's operation and a full year of increased working interest in Syncrude, we expect production to increase by approximately 10% to 15% in 2017.

At the same time, our capital spending is expected to decline by approximately $1 billion, and we will continue to manage operating costs out of the system. With year-over-year average oil prices expected to rise, we're, therefore, well positioned to significantly grow our earnings and generate strong free cash flow for our shareholders. And as a result of that, I'm pleased to confirm that Suncor's Board of Directors has approved a 10% increase in our quarterly dividend payment.

It's a little interesting to see the company make some large asset sales in the prior quarter, especially when management was saying that it had no need to sell any assets to clean up the balance sheet. Perhaps that was just a tactic to get a better sale price for those assets.

Either way, Suncor Energy looks to be in pretty decent shape heading into 2017. It has significantly lowered its operational costs for all of its oil sands and Syncrude to the point that there are significant cash generators in today's lower-cost environment. With Fort Hills and Hebron slated to come on line by the end of this year, Suncor seems to be doing all the right things.