Please ensure Javascript is enabled for purposes of website accessibility
Log In Help Join The Motley Fool
Free Article Join Over 1 Million Premium Members And Get More In-Depth Stock Guidance and Research
By Matthew Cochrane - Feb 11, 2017 at 11:07AM

Investors in Visa Inc had lots of reasons to celebrate when the company reported another strong quarter. But no reason was bigger or better than new CEO Kelly's handling of the integration with Visa Europe.

If these numbers seem too good to be true for such a large and mature company, remember that Visa Europe is still being integrated into the company and caused the numbers to look more inflated than they otherwise would. However, once the Visa Europe numbers are adjusted for, the data still looked quite robust. For instance, total payments volume in the United States, a stat hardly affected by the integration, increased a healthy 12.5% to $803 billion. Transaction growth, once normalized for Visa Europe, grew a strong 13%.

Looking beyond the numbers, the most important event taking place within the company right now is its integration with Visa Europe. While the quarter contained plenty of good news and highlights for Visa shareholders, everything else pales in significance to this right now.

In the earnings press release, CEO Kelly said, "We remain focused on the integration of Europe which is proceeding well." When glancing at the numbers and guidance Visa's management provides, the integration seems mostly on track. For the full fiscal year in 2017, the company is still guiding for 2-3% EPS accretion from Visa Europe as stronger business fundamentals offset greater currency headwinds. 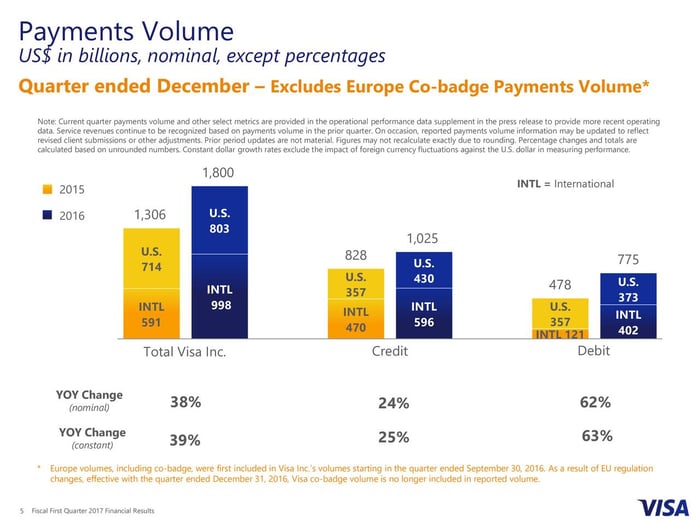 Visa originally guided for total integration costs of $450-500 million over three years. When asked if that had changed, CFO Vasant Prabhu responded that the company only expected to spend $80 million this year toward integration costs but was not yet ready to adjust its three-year guidance.

A far more important question than the surface numbers or guidance is whether Visa can retain its many large card-issuing bank clients in Europe once the integration is complete. It is on this front that Kelly seemed to particularly shine in the conference call following the earnings release, easing any lingering concerns from investors.

Kelly began his prepared remarks by stating he had spent much of his first days on the job visiting over 50 clients, government officials in nine countries, and twelve of Visa's global offices. Throughout the conference call, Kelly kept coming back to how much he was dedicated to meeting with clients to ensure that Visa was fulfilling their needs and expectations.

We actually bought Visa Europe at a time where we've got a pretty good book of business that's going to be with us for a while. I mean, that said, as I said in my remarks, I'm very, very much a client-focused person. And we're going to work hard with every single one of our clients in Europe as well as around the world, but we do have a lot of good long-term relationships locked up.

Not missing a beat

In one of his last conference calls, former Visa CEO Charlie Scharf stated he was "extremely comfortable" with the European renewal activity Visa was seeing. In that same conference call, Scharf reviewed important multiyear deals Visa had recently signed with the likes of Barclays PLC, Lloyd's Banking Group PLC, and Royal Bank of Scotland Group PLC. The fact that Kelly seems to be following in Scharf's footsteps by highly prioritizing the retention of Visa Europe's large clients bodes very well for Visa's future.

Visa shareholders enjoyed an incredible run under former CEO Charlie Scharf. During Scharf's four year tenure the stock price appreciated about 115%. While one quarter does not a legacy make for new CEO Alfred Kelly, Jr., there was certainly a lot to like in Visa's first quarter results. While it is only natural to question whether Visa can continue excelling under Kelly's leadership, if the company's 2017 first quarter is any indication, the company is in good hands.