GM is said to be in talks about a sale of its European operation. Here's what GM is probably thinking.

The news, first reported by Bloomberg early on Tuesday and subsequently confirmed by both GM and PSA, sent shares of both automakers sharply higher. That's no surprise: It's a bombshell development: Among other things, it would mean GM is essentially exiting the European market.

What a sale of Opel would mean for GM

It would mean an exit from a longtime money-losing operation. 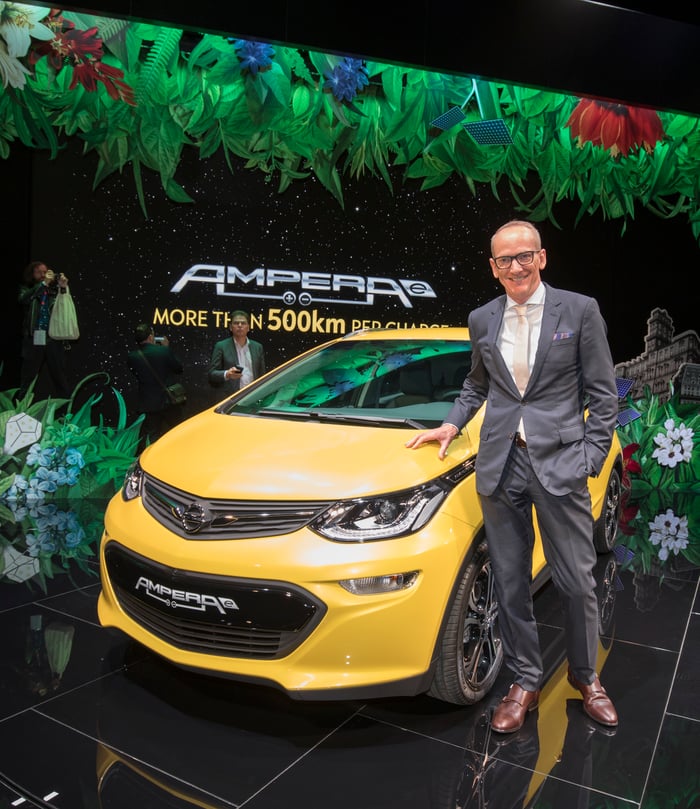 Former VW executive Karl-Thomas Neumann was a good choice to lead Opel. But even he hasn't been able to generate sustainable profits. Image source: General Motors.

GM came close to selling Opel following its exit from bankruptcy in 2009, only to change its mind at the last moment. An elaborate turnaround plan launched in 2012 was supposed to bring GM Europe back to "sustainable profitability" by "mid-decade."

To be fair, that plan turned out to be a reasonable one. GM closed an expensive factory in Germany, pulled the Chevrolet brand out of Europe, found a strong leader for Opel, and integrated it more tightly with GM's global product operations. It nearly worked: Were it not for Brexit, and the British pound's subsequent loss of value, GM Europe might have broken even or posted a small profit for 2016.

But Brexit happened, and while GM hasn't yet explained what it's thinking here, it seems pretty obvious: It's time to get out of a money-losing investment and put its capital to work in more profitable opportunities.

Why GM might be willing to sell Opel and exit Europe

Why has GM struggled so mightily in Europe? It's mostly about Opel. Opel's costs are very high: It has expensive factories and engineering offices in Germany, where wages are generous and laws make it (very) hard to cut employees. Meanwhile, the Opel brand itself was neglected for years and doesn't have as much pricing power as some rivals. The combination makes for thin profits under the very best of conditions.

Selling Opel would be a big, bold, dramatic move. It would take GM out of the world's third-largest new-car market, at least for now. It might drop GM a notch or two down the list of global automakers by sales, but it shouldn't be a surprise to investors.

A sale of Opel at this moment would be philosophically consistent with other big moves GM has made in recent years, like exiting the Russian market, closing its Australian factory, and pulling the Chevy brand out of Europe.

In all of those cases, GM showed that it's very willing to trade sales volumes for profitability. GM president Dan Ammann explained the company's thinking quite clearly at a conference for investors early in 2016.

Where we haven't seen a path to an acceptable long-term return, we have not been afraid to make the tough decisions to exit, or restructure, or adjust our business model to put us on a path where we can make a long-term return. These are just a handful of the significant decisions that this leadership team has made over the last couple of years to really strengthen the core of the business by being disciplined about saying, you know what, we can't see a path to make a long-term return in this place and therefore we are not going to invest.

The question is, is this the next best use for our next $100 million or $0.5 billion or $1 billion to put it into this market or segment and so on. And if the answer is no, we're not going to do it and we're not afraid to make those kind of calls. The results of that -- and again this is not something that just occurred to us to do. The results of those decisions are very evidenced in the financial results of the business. We have not been afraid to trade volume for sustainability, volume for quality of earnings.

This industry has a reputation of feeling like it needs to be all things to all people and in all places at all times. That is not our belief and it's not our operating model.

Look again at the first paragraph of that quote from Ammann. If GM does sell Opel to PSA, I think the story will be simple. I think GM will say that following Brexit, it no longer sees a path to an acceptable long-term return in Europe.