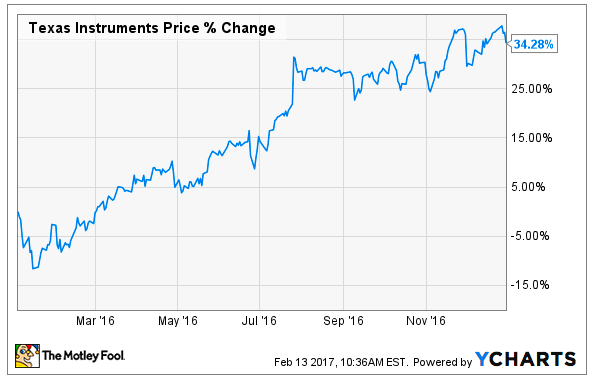 Texas Intstruments' stock price slowly started climbing in the first half of 2016, after the company beat bottom-line estimates in fiscal Q4 2015 and Q1 2016. TI didn't increase revenues, necessarily, but improvements to the company's business efficiencies, along with focusing on more lucrative businesses, pushed the company's gross margins up to record levels.

Strong gross margins are more than just good business practice for TI; the company also has a policy to return all of its free cash flow returns to shareholders. That means as the company's margins go up, so do the returns to investors. At the end of October 2016, the company said it had returned $3.8 billion to shareholders over the past 12 months, through stock repurchases and dividends.

In Q4 2016, reported late last month, TI managed to increase revenue by 7% year over year and grew revenue from its core businesses -- analog and embedded processing -- by 10% and 6%, respectively. The company is also expecting revenues for the fiscal first-quarter 2017 to fall between $3.17 billion and $3.43 billion, with earnings per share of $0.78 to $0.88. The high end of those estimates would easily top the analyst consensus of $3.21 billion and $0.82 EPS. Investors likely have more to look forward to this year if the company manages to both boost revenues and keep margins high.