Propane stocks like AmeriGas Partners tend to catch the eye of income investors because they offer above-average yields. In fact, as the following chart shows, the company and its peers currently pay exceptionally well:

However, before getting too caught up with that income potential, there are three essential things an investor must know about this propane stock.

First of all, AmeriGas actually isn't a stock at all. Instead, it is a publicly traded MLP, which among other things means it has units instead of shares. As a result, investors get a Schedule K-1 tax form instead of a Form 1099 for distributions received, which can complicate tax preparation.

One other thing that is important to note about MLPs is that this structure is not subject to corperate taxes but instead acts as a pass-through entity for tax purposes. Because of this, MLPs typically distribute most, if not all, of their cash flow to investors each year. That enables MLPs to pay higher yields. However, investors need to be aware of the potential pitfalls of that structure, such as the possibility of a distribution reduction during lean times. Furthermore, MLPs often need to issue more units or additional debt to finance growth, which can cause financing issues during tough times. 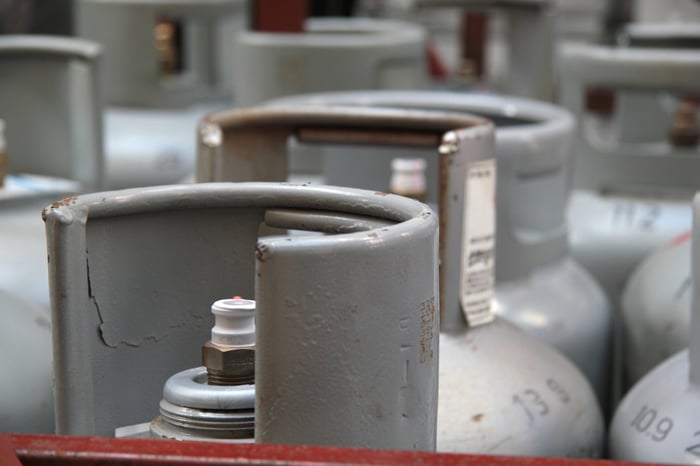 2. AmeriGas is a subsidiary of UGI Corp

One thing that differentiates AmeriGas Partners from fellow propane MLPs Ferrellgas Partners and Suburban Propane Partners is that diversified energy holding company UGI Corp (NYSE:UGI) owns its general partner and 26% of the common units. That general partnership relationship is significant because it entitles UGI to a larger percentage of AmeriGas' earnings.

Last year, for example, AmeriGas Partners generated $218 million in net income. However, UGI's general partner interest entitled it to $42.1 million of that, leaving limited partner unitholders to split the remaining $175.8 million, including with UGI which received 26% of that income to match the percentage of common units it controls. Add it up, and UGI's share of AmeriGas' earnings was 40% last year.

3. The changing weather can have a big impact on results

Most MLPs typically own assets like pipelines and processing plants that generate steady cash flow because these companies sign customers to long-term fee-based contracts. Not so with propane distributors, which are volume-based businesses. That's important because outside factors like the weather can have a significant impact on propane volumes, especially in the home heating market.

For example, in 2016 the weather across AmeriGas Partners' service markets was warmer than normal for most of the year. As a result, the company's adjusted EBITDA slumped 10.5% versus 2015. However, results would have been worse if it wasn't for a cool down at the end of the year. Overall, weather across its service areas was 7.4% cooler than the prior year during that quarter, which fueled a 3.6% increase in volumes.

Propane peers Ferrellgas Partners and Suburban Propane Partners are also highly sensitive to changes in the weather. For example, during the final quarter of 2016, the weather was 11% cooler than the prior year in Suburban Propane's service territories, driving an 8.1% increase in gallons sold. However, before that deep freeze, warming weather had plagued propane distributors. That's clear from comments by Ferrellgas Partners CEO James Farrell, who warned last year that "unusually warm weather conditions -- including temperatures during our first quarter that were 35% higher than normal -- continued to negatively impact our propane revenue." As a result, Ferrell said that the company was "taking aggressive actions to position Ferrellgas for long-term growth and profitability." One of the steps it took was to reduce the distribution 80.5% last fall to better align the payout with cash flow. The concern is that AmeriGas, likewise, might have to cut its payout one day if weather conditions don't return to normal. 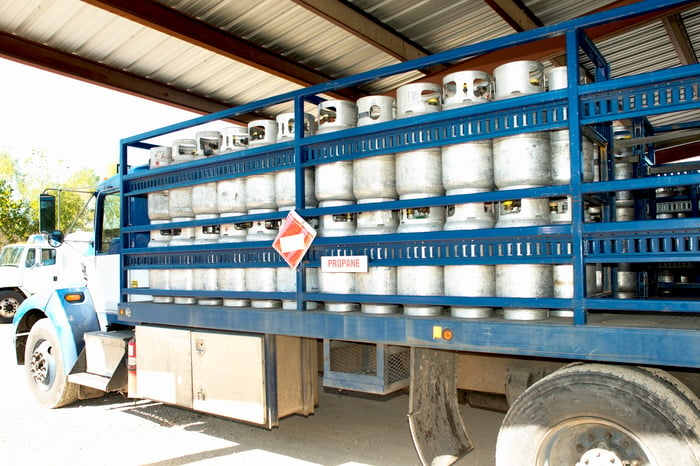 While AmeriGas Partners currently offers income investors a generous yield, there are several reasons why that payout is above the norm. Topping the list is the fact that the company has chosen to operate as an MLP, which means it must distribute most of its income to investors. That said, unlike most other MLPs, its cash flow isn't very stable because propane demand ebbs and flows with the weather. Add to that the fact that parent company UGI lays claim to an outsized percentage of its income and there are several good reasons why income investors might want to consider other investments instead.