Just one short month ago, some folks in my neighborhood were still pulling out their propane grills to cook up some dinner. But then the cold came on with a vengeance, and now the only thing anyone's doing with a propane grill is putting one on their Christmas wish list.

Even though the grills are put away for the year, propane companies like Suburban Propane Partners (NYSE:SPH) and AmeriGas Partners (NYSE:APU) are just about to enter the busy season as folks begin using propane as a heating source. But just because they're busy doesn't mean the stock market will necessarily reward them with outperformance. Let's see which of these companies is the better bet for investors. 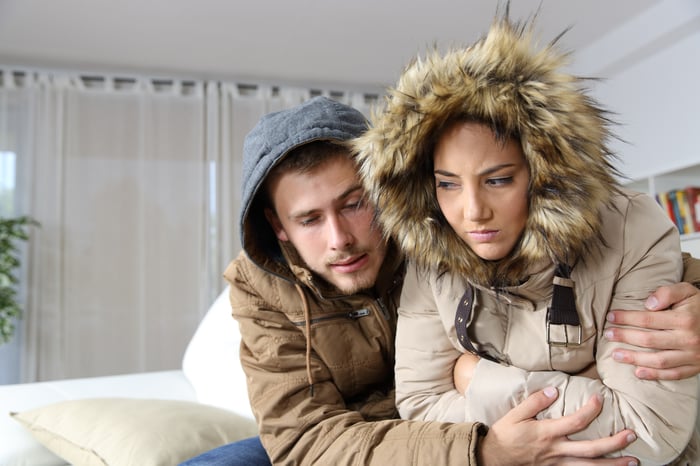 Out in the cold

The first thing an investor should know about both of these businesses is that they make most of their money from propane deliveries and service fees as opposed to propane sales. That means that volumes -- the amount of propane they deliver -- and demand, which can drive up the amounts of the fees they charge, are more important to their bottom lines than the actual price of propane. For example, in its recently completed 2018 fiscal year, AmeriGas reported a 19% increase in the cost of propane, but its margins were up "only slightly."

Since most propane is used as a heating fuel, the winter months are make-or-break for propane deliverers like Suburban and AmeriGas. And winters have been getting warmer lately. In fact, the mild winters of 2015-16 and 2016-17 wreaked havoc on both companies, and although the winter of 2017-18 was a bit colder (and longer, thanks to the polar vortex in April), the trend is going the wrong direction for these companies. The Trump administration's recently released Fourth National Climate Assessment details how this warming trend is likely to continue.

With both companies facing similar headwinds from a warming climate, we'll need to look more closely at the businesses to determine which is the better buy. Unfortunately for us, by many of the metrics we'd ordinarily use to compare companies like these, AmeriGas and Suburban are so similar that any differences are negligible.

Take, for example, distribution yield, an important factor to consider when looking at master limited partnerships (MLPs) like these. AmeriGas' yield of 10.4% is practically identical to Suburban's yield of 10.6%. Or we could look at long-term debt, which is often a concern for MLPs. Both partnerships have high debt-to-EBITDA ratios, with AmeriGas' ratio of 5.1 slightly outpacing Suburban's ratio of 4.5. But that's not such a huge distinction when both ratios are so high. Indeed, according to Moody's ratings, Suburban's debt is rated Ba3, one level worse than AmeriGas' Ba2 (neither is investment grade).

Meanwhile, there are other pieces of information that are provided by one company but not the other. Distribution coverage, for example -- how many times over an MLP can pay its dividend using its distributable cash flow. Suburban seems to be in good shape, reporting an excellent coverage ratio of 1.3 times on its most recent earnings call. AmeriGas, on the other hand, doesn't report its coverage ratio (or, for that matter, its distributable cash flow). Meanwhile, AmeriGas provided 2019 guidance while Suburban didn't, although both companies' managements expressed optimism about the upcoming year.

Still, if we look beyond the major metrics, it appears that one company's fundamentals are superior.

In looking at the partnerships' most recent 10-Ks, Suburban Propane seems to be doing a good job of managing its operations. Total distributions paid for FY 2018 of $147.2 million were well below operating cash flow of $208.5 million. During the course of the year, the company also managed to pay down $17.0 million in long-term debt. While that's just a tiny fraction of the company's overall $1.3 billion debt load, it is making progress, helped in no small part by a 32.3% distribution cut the partnership made in 2017, which freed up needed cash.

AmeriGas, on the other hand, is paying out a much higher percentage of its cash as distributions. In FY 2018, it paid out $402.6 million in distributions, while generating just $410.3 million in operating cash flow. That doesn't leave much (if any) room for error, and indeed, although AmeriGas paid down $2.8 million in long-term debt during FY 2018, it increased its short-term debt by $92 million, leaving it with more total liabilities than it started the year with.

That puts AmeriGas in significant danger of a distribution cut. With its credit already at junk status, debt is expensive to take on. If another warm winter cuts into earnings and cash flow, though, it will need to pile on (even) more debt to cover its distribution...or sell assets to raise cash, which isn't a great option either.

With its distribution cut already behind it, Suburban Propane Partners looks like the better -- and safer -- buy right now. It's generating enough cash to cover its double-digit yield with some left over to put toward debt reduction, capital expenditures, and even small acquisitions. A warm winter might cause an unwelcome pinch, but it probably wouldn't put the company in serious danger of cutting its distribution again. The same can't be said for AmeriGas Partners.

But even though Suburban is the winner in this head-to-head matchup, the propane delivery business isn't the guaranteed cash cow it used to be. Investors looking for long-term investments offering solid yields would probably do better to look elsewhere.