The professional visualization segment has stalled in recent quarters, but this could return some momentum to the business.

The virtual reality (VR) market has massive potential, and NVIDIA (NVDA 0.52%) is pulling out all the stops to take advantage of this opportunity. The company has just announced a new line of Quadro graphics processing units (GPUs) based on its Pascal architecture, unveiling it at the SolidWorks World conference in the first week of February, a major event for workstation vendors.

These new professional-grade GPUs are aimed at providing supercomputer-level capabilities to desktop workstations, which will allow users to create complex designs in the fields of virtual reality and deep learning. Bob Pette, the vice president of Professional Visualization at NVIDIA, clearly said that the company is trying to address the design complexities faced by engineers and designers:

Professional workflows are now infused with artificial intelligence, virtual reality and photorealism, creating new challenges for our most demanding users. Our new Quadro lineup provides the graphics and compute performance required to address these challenges.

The top of the line GP100 Quadro GPU carries some really strong specs. For instance, the company claims that the GP100 can create photorealistic images over 18 times faster when compared to a central processing unit, as it is equipped with 16GB of high-bandwidth memory (HBM2). Users can even combine two of these GPUs in order to generate more visual computing power.

Additionally, NVIDIA is marketing the GP100 and P4000 Quadro GPUs as "VR Ready", as they can help users create immersive and life-like content. This could prove to be a big tailwind for the company since the VR content creation market is set to grow significantly as more and more companies invest in this technology.

Last month, HTC decided that it would invest $10 million in VR content aimed at making the world a better place to live in, as a part of the United Nations' Sustainable Development Goals. At the same time, VR-focused start-ups are getting funding from the likes of Comcast Ventures to generate VR content.

Applying that annual growth rate, this market will be worth over $13 billion by 2020. If PCs maintain their market share, then this platform will generate nearly $6 billion of VR revenue as compared to the less than $100 million seen in 2015. This is great news for NVIDIA as corresponding hardware needs increase.

NVIDIA's professional visualization business has stalled in the past few quarters. 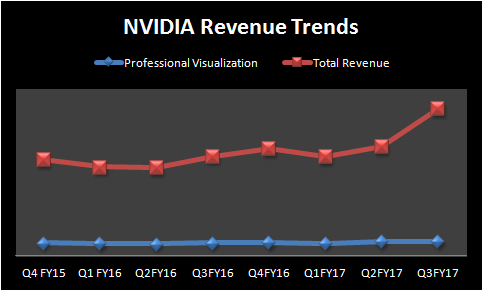 Professional visualization contributed slightly more than 10% of the top line in the third quarter, compared to around 14% of revenue in the prior-year period. This segment has been almost flat for the past eight quarters.

When compared to fast-growing segments such as gaming and datacenter, professional visualization appears less than promising, but this is going to change as the VR opportunity gains traction, and more content creation takes place. NVIDIA will eventually sell more of its professional GPUs due to its strong market share of almost 71% in discrete graphics.

More importantly, the company should be able to sustain its market share in professional GPUs as the first player to the market with a high-bandwidth memory-enabled card. Though Advanced Micro Devices' upcoming Vega architecture is also based on HBM2, its FirePro line of professional GPUs is yet to hit the market. NVIDIA should have a distinct advantage after launching a powerful product earlier than its rival in a fast-growing market.