Brian Feroldi, Anders Bylund, and Cory Renauer
(TMFTypeoh)
Author Bio
Brian Feroldi has been covering the healthcare and technology industries for The Motley Fool since 2015. Brian's investing strategy is to buy high-quality companies and then let compounding work its magic. See all of his articles here. Follow @brianferoldi
Follow @brianferoldi

The easiest way to generate superior investment returns is to buy high-quality stocks that are temporarily trading on the cheap. Of course, identifying those stocks isn't always easy.

To help give you a few ideas, we asked three Fools to share a great stock that they think is trading at a discount right now. Read on to see why they picked Qualcomm (NASDAQ:QCOM), AutoZone (NYSE:AZO), and McKesson (NYSE:MCK). 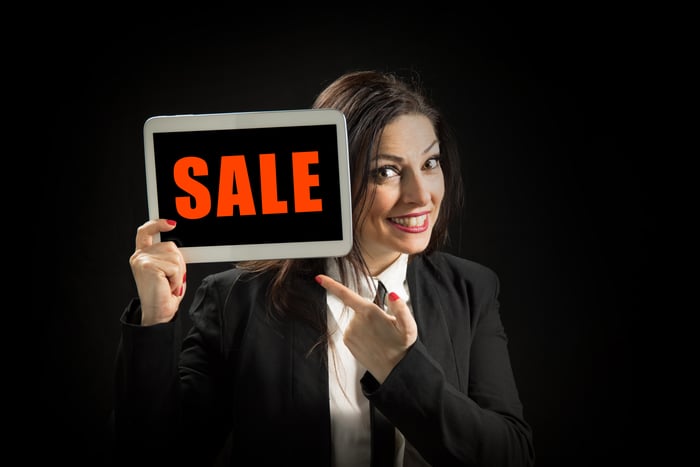 Anders Bylund (Qualcomm): The leading provider of mobile chips will remain relevant as long as there's a market for mobile communications. Qualcomm has a history of delivering strong cash flows and solid revenue growth, both in the long term and quarter by quarter. Management then funnels the incoming cash into a steady stream of generous dividend increases and opportunistic share buybacks.

But the stock has traded largely sideways over the last five years, even as its financial foundation continued to grow stronger. This trend came to a point in recent weeks, as major customer Apple took Qualcomm to court over anticompetitive allegations.

Thanks to that lawsuit, Qualcomm shares are trading at prices not seen since last July. It's at a 26% discount from 52-week highs. At the same time, Qualcomm filed its first-quarter results two weeks ago, showing decent revenue growth and a 23% increase in adjusted earnings per share.

With share prices trawling the ocean floor, I expect Qualcomm's next quarterly report to show a spike in buyback activity. The pending $38 billion acquisition of NXP Semiconductors remains on track to close before the end of calendar year 2017 and is a game-changer in the making. Investors would be smart to pick up some Qualcomm shares while the prices are low, locking in a 4% dividend yield at historically low P/E and EV-to-EBITDA ratios.

Brian Feroldi (Autozone): You might laugh at my assertion that a stock trading for around $750 per share is "on sale," but I think that's exactly the situation that we have today with the auto-parts retailer AutoZone. And, of course, price and value are not the same thing.

Autozone has been a home run stock over the past decade thanks to the fanatical execution of its simple but powerful business model. Autozone's intense focus on customer service has allowed it to steadily grow its same-store sales over time. When combined with consistent store openings, margin improvements, and regular share repurchases, the results have been nothing short of extraordinary. 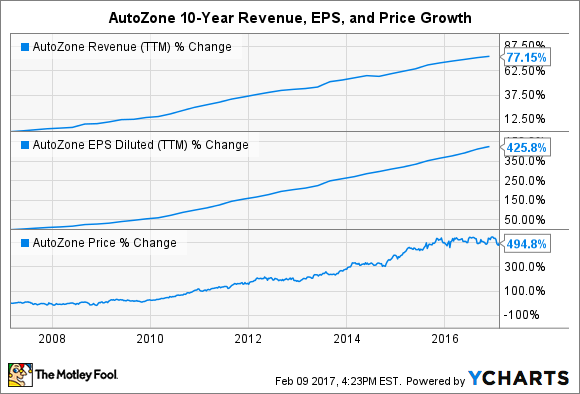 Investors saw this formula work its magic when the company reported its first-quarter results in early December. Total revenue grew by 3% on the back of a 1.6% gain in same-store sales and new store openings. However, margin improvements helped translate that modest top-line growth gain into an 8% increase in net income. Better yet, the company's aggressive share repurchase program allowed EPS to grow by a solid 13%.

Looking ahead, AutoZone plans to place a growing emphasis on its "do-it-for-me" business, where the company offers professional help on auto maintenance. This is estimated to be a $67 billion market and the company only has a 3% market share, providing it with ample room for expansion.

Despite its consistency and potential, AutoZone's stock has recently pulled back a bit off its 52-week high, which is affording investors a chance to buy into this winning concept for less than 15 times forward earnings. That's a bargain in my book.

McKesson: More profitable than it looks

Cory Renauer (McKesson): With a stunning $196.5 billion in revenue over the past 12 months, this may be one of the most important healthcare companies that you've never heard of. By revenue, it is the largest of the big three wholesale prescription drug distributors in the U.S., which gives it tremendous economies of scale that should be able to keep smaller competitors at bay for the long term.

You might be surprised to learn that a company at the top of a three-way oligopoly is trading at bargain-basement prices, but earnings growth over the past year has been somewhat elusive for McKesson and its peers. Reported trailing-12-month earnings have fallen 12.8%, although total revenue grew 2.9% over the same time frame. Add in some unpredictable political risk from the new presidential administration, and it's no wonder the stock has fallen about 28% over the past six months.

Look a bit closer, though, and you'll see that profitability in terms of free cash flow is stronger than at any point in the company's history. Free cash flow is typically calculated as cash from operations minus capital expenditures to keep those operations humming along, but shareholders like to think of it as cash a company can return to shareholders in the form of dividends and share buybacks, pay down debts, and make acquisitions. Over the past year trailing free cash flow has soared 93.2% to about $5.8 billion.

The average stock in the S&P 500 is trading at a nerve-rattling 24.2 trailing P/E ratio, which makes McKesson's recent price of about 16.6 times trailing earnings look like a relative deal. At just 5.5 times trailing free cash flow, though, shares of this terrific company are an unbeatable bargain right now.