Under Armour (UA -2.54%) (UAA -2.41%) has been in the headlines for all the wrong reasons over the past year. Shareholders sued the company for splitting the stock to dilute their voting rights, its flagship Curry 2 shoes were mocked for resembling "nurse shoes", and its sluggish revenue growth caused the stock to plunge more than 40% over the past 12 months. To top it all off, CEO Kevin Plank recently alienated the company's customers, spokespeople, and investors by praising President Trump -- which he later apologized for in a full-page newspaper ad.

All that chaos indicates that the former Wall Street darling, once hailed as the "next Nike (NKE -1.02%)", is experiencing serious growing pains.

Let's cut through all that noise and see where the headwinds and tailwinds could propel Under Armour over the next year. 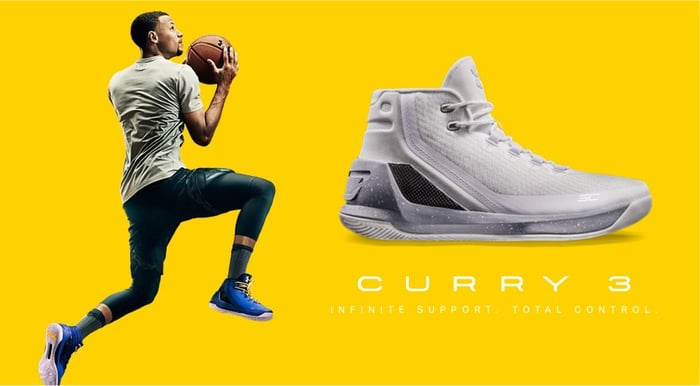 The headwinds facing Under Armour

Under Armour expects its revenue to rise just 11%-12% this year, compared to 22% growth in 2016 and 28% growth in 2015. That slowdown was mainly attributed to the bankruptcy of Sports Authority last year, which flooded the market with excess inventory, and tougher competition from rivals like Adidas (ADDYY -2.97%). Between the end of fiscal 2015 and 2016, Under Armour's inventories rose 17%.

Under Armour is becoming increasingly dependent on footwear, exposing it more heavily to 800-pound gorillas like Nike and Adidas, which have much higher marketing budgets. To keep pace with those rivals, Under Armour must spend more on marketing and sponsors. But to sell more shoes, it has to reduce prices -- which puts tremendous pressure on its operating margins. 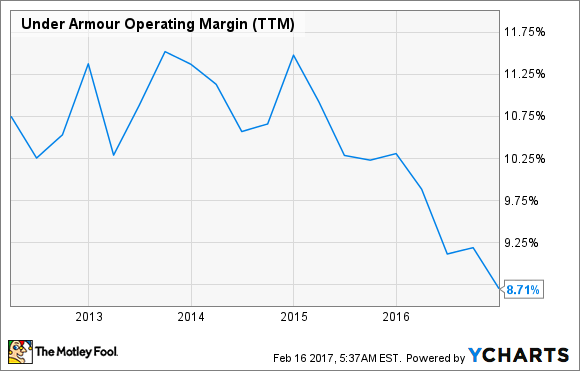 To make matters worse, Under Armour manufactures nearly all of its products overseas, but generated 83% of its sales from North America in 2016. This could become a major headwind if the Trump Administration raises taxes on products manufactured abroad -- which explains why Plank was so eager to praise the president. Under Armour recently launched its first line of apparel manufactured in America, but it's highly doubtful that it can bring more of its production lines back home without crushing its margins.

Under Armour has also been losing a lot of top executives. COO and CFO Brad Dickerson resigned in late 2015, followed by chief marketing officer Henry Stafford and chief digital officer Robin Thurston in 2016. In January, CFO Chip Malloy resigned after holding the position for less than a year. Those big departures hint at major turmoil in the company's top ranks.

The tailwinds that could lift Under Armour

All those challenges, along with Plank's headline-making controversies, have made it very easy to be bearish on Under Armour. But investors shouldn't neglect the tailwinds, which could help the stock rebound over the long term.

First, Under Armour believes that its expansion into overseas markets, particularly Asia, can offset its slower growth in North America. In 2016, Under Armour's international sales surged 63% and accounted for 15% of its top line. That compares very favorably to the 16% growth of its North American business. A growing dependence on international markets could also insulate it from any potential border taxes passed by the Trump Administration, since the production and sales of its products could all be completed overseas. 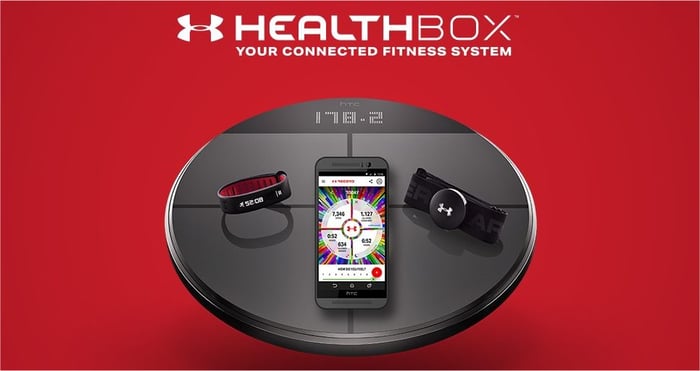 Second, Under Armour has been investing heavily in fitness trackers and mobile apps. Last year, it launched the HealthBox bundle (a fitness tracker, wireless scale, and heart rate monitor) to challenge market leader Fitbit (FIT). Before that, it acquired mobile apps like MapMyFitness, MyFitnessPal, and Endomondo to expand its digital ecosystem. It also launched other "connected" products like smart shoes.

That "Connected Fitness" business only accounted for 2% of its revenues in 2016, but its top line grew 50% for the year, indicating that it could eventually become a high-growth secondary business for the company. If it's serious about beefing up this business, it could even try to buy Fitbit, which has an enterprise value of just $650 million due to its ongoing troubles.

Lastly, Under Armour believes that it can "premiumize" its footwear and apparel to offset rising operating expenses. That could be a tough sell, since it assumes that consumers will pay similar prices for higher-end products from Under Armour, Nike, and Adidas -- but smart marketing campaigns and product launches could make all the difference.

So where will Under Armour be in a year?

After weighing the bearish arguments against the bullish ones, I believe the bears are likely still right about Under Armour. It's doubtful that all those headwinds will dissipate and all those tailwinds will pick up within a single year.

When we consider that Under Armour trades at 48 times earnings -- compared to Nike's P/E of 25, Adidas' P/E of 31, and the industry average of 26 -- it's painfully clear that UA's stock needs to fall further before it becomes a bargain. No one can be sure exactly where Under Armour stock will be in a year, but I believe that it could continue falling over the next few quarters.