If we start inspecting aging dams across the country, we may not like what we find.

When politicians talk about "crumbling infrastructure," it's often hard to ascertain exactly what they're talking about. Is it bridges falling down, an excessive number of potholes, or maybe aging airports? It could mean any number of things depending on who's talking and who's listening.

This week, an aging piece of infrastructure is acutely impacting nearly 200,000 people in California as the Oroville Dam's damaged spillways teeters close to collapse, potentially flooding a large swath of northern California. The dam itself doesn't (yet) appear to be damaged, but it's not functioning as planned. And the problems aren't new given the fact that environmental groups were pushing for additional spillway construction 12 years ago at the now 49-year-old dam. Incidentally, dams are only designed with a 50-year life span, so it's worth keeping in mind that infrastructure isn't built to last forever.

Any kind of infrastructure goes through normal wear and tear over time, but the challenge today is the sheer age of dam infrastructure in the U.S. According to a 2015 Department of Energy report, 75% of hydro capacity is at plants that are over 50 years old (although some have been upgraded since first construction). The Oroville Dam's potential spillway collapse could bring that age into focus, which could impact other sources of renewable energy as well. 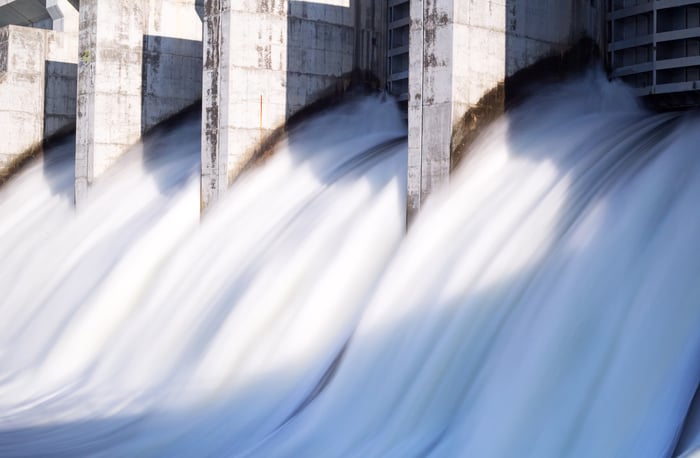 The chart below is from the Department of Energy's 2014 Hydropower Market Report, which was released in April 2015. It shows that a vast majority of U.S. hydro plants were built between 1940 and 1970, particularly large plants. 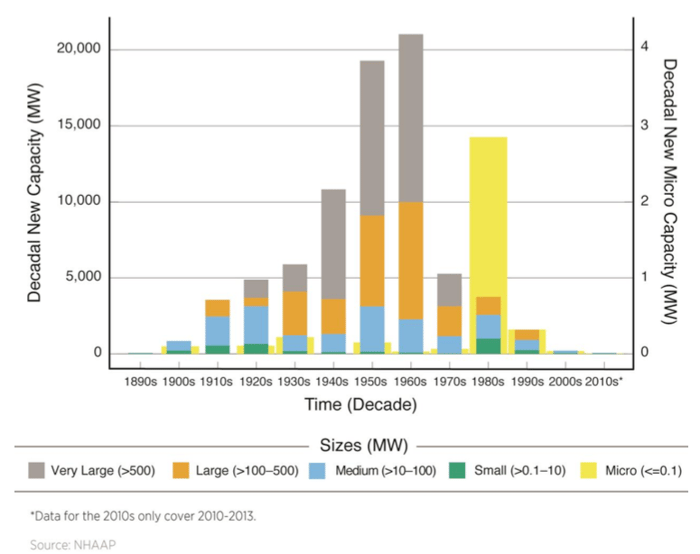 If these plants begin to be reviewed more closely or are decommissioned, it could take dozens of gigawatts of energy production offline over the next decade. And given their age, it may be a good idea to do just that.

The crumbling hydro infrastructure may also be a new opportunity for wind and solar energy in the U.S.. When you consider that hydro power generated 249 million MWh of electricity in 2015, the opportunity is enormous.

Energy and the RPS standard conundrum 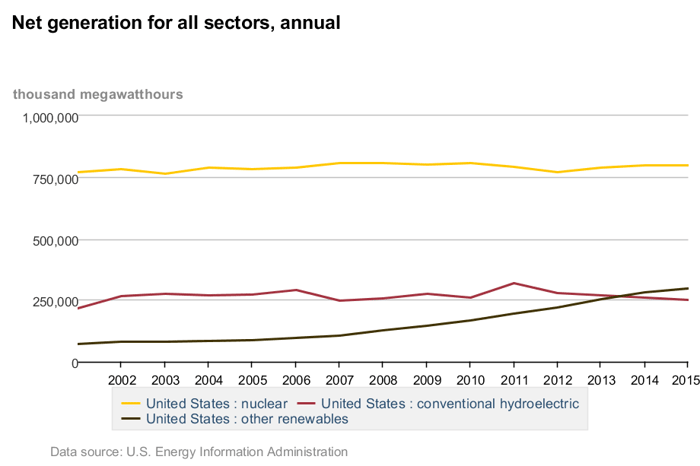 But it's also the biggest single part of state-level renewable portfolio standards (RPS). In states like California, this is the policy that has driven the growth in wind and solar over the past decade. If you pull any hydro plant out of the mix, another energy source has to fill that gap. And it will have to be clean energy, so wind and solar fits the bill.

A growth opportunity for solar energy

Let's take the Oroville Dam as an example of the challenge and opportunity for utilities, grid operators, and renewable energy. If the 819 MW dam were to be taken offline, it would take about 3.5 GW of solar (which only produces energy about a quarter of the time) to fill the gap. That compares to 14.6 GW being installed in all of 2016, according to GTM Research, so large dams are incredibly important to the country's electricity infrastructure overall.

But it wouldn't be crazy to think that over the course of the next decade or two some of these hydro plants will be decommissioned as they age. And to replace all hydro, about 114 GW of solar or wind would need to be installed to replace clean energy with clean energy. RPSs would demand that wind and solar would fill the gap, not fossil fuels.

What's going on at the Oroville Dam has an impact on years' worth of energy planning, especially if the spillway collapses. In California's RPS structure, a large hydroelectric dam couldn't be taken offline without eventually being replaced by renewable energy sources like wind and solar. And when you consider the sheer age of the hydro infrastructure in the U.S., it could create a huge hole other sources of renewable energy would need to fill.