At recent share prices, General Motors (NYSE:GM) has sported a nice dividend yield around 4.1% That alone is a strong reason to buy the stock, but only if the fundamentals are sound -- and if GM can sustain that dividend payment over time.

Can it? That's a good question. GM's history gives us reasons to be worried. But on the other hand, today's GM is a very different company from the General Motors of old. Let's take a closer look.

Dividend investors with good memories will recall that there was a time when GM had a spectacular dividend yield of over 10%. They'll also recall that that period was fairly brief, and what followed wasn't reassuring.

GM finally cut its quarterly dividend to $0.25 in February 2006, and then suspended it entirely when things got dire in the spring of 2008. In retrospect, the truth is that toward the end, GM was paying a dividend it couldn't properly afford to pay.

How to tell if today's GM can afford the dividend

GM restored its dividend in the first quarter of 2014. At the time, it was on the road to recovery after an extensive restructuring and a complete overhaul of its board and upper management. It has raised the dividend modestly each year since, paying $1.20 per share in 2014, $1.38 per share in 2015, and $1.52 per share in 2016. 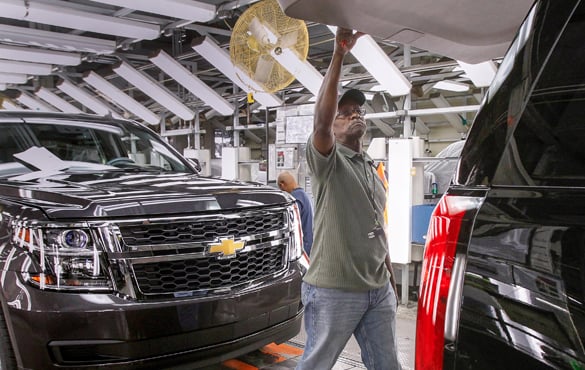 Can GM afford to sustain that? Auto sales are cyclical, and like other automakers, GM's fixed costs are high: That means its profits will be squeezed during the next downturn. In the past, GM would have swung to a loss. It's much healthier now, and that's less likely unless the downturn is severe. But it's still an important question.

Generally, when we ask that question, the first thing we look at is the company's free cash flow. That's the right thing to do most of the time, but with GM, it doesn't give us the full picture. GM is a complex multinational company that (among other things) has an in-house bank, General Motors Financial.

The presence of GM Financial complicates a lot of the numbers aggregated by financial sites. That's why GM reports a separate, non-GAAP number it calls "adjusted automotive free cash flow." It defines the metric as net cash provided by its core automotive activities (the making and selling of cars, trucks, and SUVs), minus capital expenditures and "adjusted" for its discretionary pension plan contributions.

The chart below shows GM's adjusted automotive cash flow for every year since 2011, as well as the amount paid out as dividends. 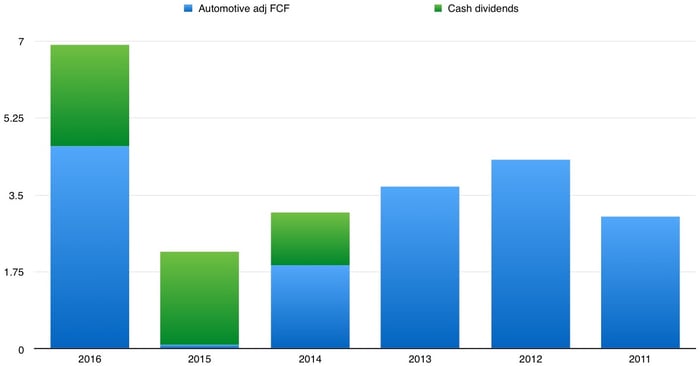 Note that 2015 looks quite tight, but that was a special case. Under pressure from activist shareholders, GM was working to return some of its excess cash to shareholders. It spent about $3.5 billion on a share-repurchase program in addition to its dividends in 2015 (and another $2.5 billion on share buybacks in 2016). The share-repurchase program is not something that we'd expect GM to continue with when the economy starts to slide.

But will it continue the dividend? It looks as though it should be able to do so -- and GM's CFO has said that it will, unless things get dire.

How GM will prioritize the dividend in a recession

During GM's second-quarter 2016 conference call, an analyst asked GM CFO Chuck Stevens if the company expected to continue to pay its dividend through the next economic downturn. Stevens said that it would depend on the severity of the downturn, but noted that GM maintains both a cash reserve and lines of credit that it can draw on in tight times when profits are thin or nonexistent.

Those reserves exist primarily to ensure that GM can continue investing in future-product development. But Stevens said that as long as GM wasn't drawing on its lines of credit -- or put another way, as long as it hadn't burned through its cash hoard -- he expected that the company would continue to pay the dividend.

As you can see, GM will be able to sustain dividends for a while even if its operating profit falls to zero -- which is only likely to happen at the trough of a very steep recession.