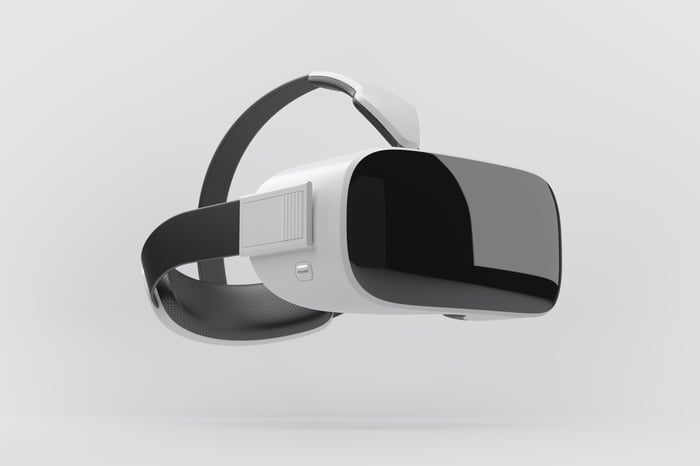 Consumer-level virtual reality (VR) received its first big push in 2016 with major headset launches from Facebook (NASDAQ:FB), HTC (NASDAQOTH: HTCCY), and Sony (NYSE:SONY), but uptake for the technology fell short of many analysts' expectations, and there are a range of challenges that threaten to limit future adoption. Sales for Facebook's Oculus Rift and HTC's Vive headsets dried up after their respective launches, and SuperData cut its 2016 sales estimate for Sony's PlayStation VR from 2.6 million units to 745,000 units -- potentially worrying signs for the future of head-mounted displays.

VR still has compelling prospects, but it's also clear that the technology will have to overcome certain roadblocks before it's ready for prime time. In order to better understand the potential growth trajectory for virtual reality in 2017 and beyond, let's take a look at some of the factors that are shaping the progression of the technology.

More affordable, but not cheap enough

The fact that Samsung's Gear VR -- which uses compatible cellphones for its display and retails at $99 -- is the top-selling headset suggests that price will continue to be a key hurdle for higher-end virtual reality adoption. The Oculus Rift still sells for $599, while the Vive is priced at $799, and the PlayStation VR retails at $399. In addition to a growing list of compatible phones for Gear VR and Alphabet's Google Daydream platform, more headsets will hit the market in 2017 and fill in the gaps between high- and low-end experiences. Increased competition should put pressure on Facebook, HTC, and Sony to lower the prices for their devices or improve value propositions through bundling and other promotions.

Lenovo is expected to release a headset this year that delivers higher resolution than the Rift or the Vive, a lighter weight, and augmented reality (AR) capabilities -- all at a sub-$400 price. Lenovo's device will be part of Microsoft's (NASDAQ:MSFT) Windows Holographic virtual reality ecosystem, and make use of a dual-camera internal tracking system (as opposed to the external systems used by the Vive, Oculus Rift, and PS VR) that could be instrumental in the emergence of more affordable headsets. Windows Holographic headsets will reportedly start in the $300 price range and are being designed to be compatible with mid-range computers -- moves that should make virtual reality more accessible and build Microsoft's position in the space. Companies including Asus, Acer, HP, and Dell are also developing entries for the Windows Holographic virtual reality platform, though it's not clear which, if any, will launch this year.

Even with new entrants, the cost of high-end VR will likely continue to be prohibitive to mass-market adoption, but reports that Facebook is closing 200 out of 500 Oculus Rift demo stations at Best Buy locations due to low engagement suggests other obstacles to VR going mainstream this year.

VR isn't going to break out yet

While new competition means the cost of entry for mid-level and high-end virtual devices is likely to fall this year, a growing selection of headsets will contribute to the trend of fragmentation that threatens to limit the progression of VR. Early competition to establish leadership in the space and technological differences between high-end and low-end devices have created a situation where many software offerings are not compatible across devices. Fragmenting even exists within individual platforms, with Oculus Rift developers needing to account for segmentation created by the introduction of the device's touch-based controllers.

For now, VR hardware lacks a "killer app" to justify the cost of entry, and the dynamics of the current market present barriers to the arrival of breakthrough software. With small and fractured installed bases for VR headsets, developing big-budget virtual reality experiences still doesn't make sense for most developers, and that issue is likely to persist through 2017. Even Sony, a platform holder with wide range of video game development studios, seems to have few projects on the horizon to support its headset. Without standout software experiences to hook users and encourage engagement with the new display mediums, the high cost of entry will remain prohibitive to the mass market audience.

While early uptake for VR has been disappointing compared to initial projections, it's important to remember just how young this technology is. The overly optimistic forecasts for VR adoption in 2016 give cause for some skepticism when looking at future targets, but expectations for huge growth in the category persist, with a study from Citigroup estimating that the combined market for VR and AR will reach $2.16 trillion by 2035.

Despite initial roadblocks, the immersive potential offered by VR and AR and improvements to hardware and software make it likely that the technology will eventually achieve mass adoption. Last year marked the beginning of the consumer VR push, and, while it doesn't look like 2017 will deliver the confluence of factors needed to propel the medium into the mainstream, the long-term outlook remains very bright.

The early adopter market is mostly buying VR for video games, but the technology will eventually be bridged to online shopping and other uses, and the immersive qualities of AR and VR should open up huge advertising opportunities that help build support for the new mediums.