If you're interested in profiting from the coming VR boom, consider this advice.

Virtual reality (VR) is forecast to become a $162 billion market by 2020, and the opportunities for investors to benefit are growing. Nearly every major technology company is pursuing VR, or at least looking into it, and some are spending billions in order to make it the next popular computing platform.

So, how can individual investors benefit from all of this? Start with these three tips. 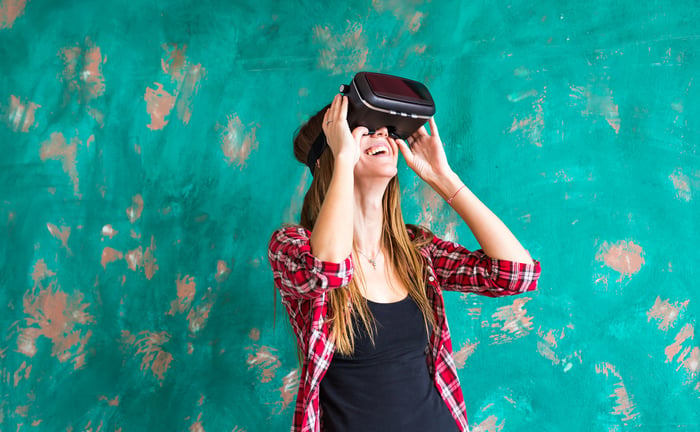 You're probably hearing a lot about VR headsets these days. Oculus released its long-awaited Rift headset last year; Facebook (META -2.03%) purchased the company more than two years ago for $2 billion.

But don't focus on any of that.

VR headsets and other hardware are clearly an important part of this market, but the real gains will come from software and services. Tom Mainelli, vice president of devices and AR/VR at IDC, said last year that "... what people can do with that hardware will depend upon the applications and services that power it."

According to IDC, hardware sales will account for more than half of VR and augmented reality (AR) revenues through 2020, but that it's software and services that have the real long-term potential.

"AR/VR software revenues will also get off to a quick start, growing more than 200% year over year in 2016, but will quickly be overtaken by services revenues in the middle years of the forecast, as logistics and manufacturing demand enterprise-class support," Mainelli said.

The bigger, the better

In the technology sector, it's often the players that start out the biggest that win in the end, and virtual reality will likely be the same.

That's why it's important to look at what Facebook, Alphabet, and Sony are doing in the space. Facebook's long-term goal isn't to just sell high-end VR headsets, but rather to create the next widely adopted computing platform.

CEO Mark Zuckerberg said in an interview with Business Insider last year that Facebook is "mostly interested in the software" aspect of VR, though he noted that the early stages of VR development will require a focus on both hardware and software.

While Facebook is looking ahead to the next computing platform, Alphabet is busy focusing on how it can gain from the mobile VR market. The company recently debuted its Daydream platform for Android users to find VR videos and apps.

The importance of this VR hub can't be overstated. Smaller companies may be making VR content, but Alphabet's Google has built one of the only places where all of this content can live, and be easily found. As mobile VR takes off, Daydream will likely be the place where users go to get their content. Think of it like a Google Play store for VR.

And while Facebook and Alphabet are busy building out platforms, don't forget Sony's potential to make itself a powerhouse in the VR gaming market. The company already working with more than 230 developers and publishers to create 160 PlayStation VR software titles.

Sony's Game and Network Services is the company's second-most profitable business, and the company has said the VR "offers great future potential" for the segment.

Honestly, the payoff for VR investors will likely take some time to materialize. That's because while the market is growing fast, VR represents only a small portion of revenues -- if any -- for many of the companies involved in the space right now.

Facebook said its investments in VR weren't material to the company's 2016 financials, and Zuckerberg has stated several times that VR probably won't truly take off for another five to 10 years.

But that shouldn't be a deterrent for investors. Virtual reality has the potential to transform how people access information, view content, and interact with each other. If it does become the next big computing platform, then taking a long-term approach to the will be the wise course.

Investors should heed this advice Zuckerberg gave last year: "We are betting that virtual reality is going to be an important technology. I am pretty confident about this. And now is the time to invest."

Suzanne Frey, an executive at Alphabet, is a member of The Motley Fool's board of directors. Chris Neiger has no position in any stocks mentioned. The Motley Fool owns shares of and recommends Alphabet (A and C shares) and Facebook. The Motley Fool has a disclosure policy.