The news is out and the results are in: Huntington Ingalls (NYSE:HII) beat on earnings.

So I guess one way to summarize the results would be as good (earnings), bad (free cash flow), and indifferent (sales). At the same time, Huntington scored a clear win over Wall Street analysts, reporting a big earnings beat in Q4 (where pro forma profits came it at $3.67 versus expectations of $2.48 per share) and on revenues as well ($1.92 billion reported, versus only $1.85 billion expected). 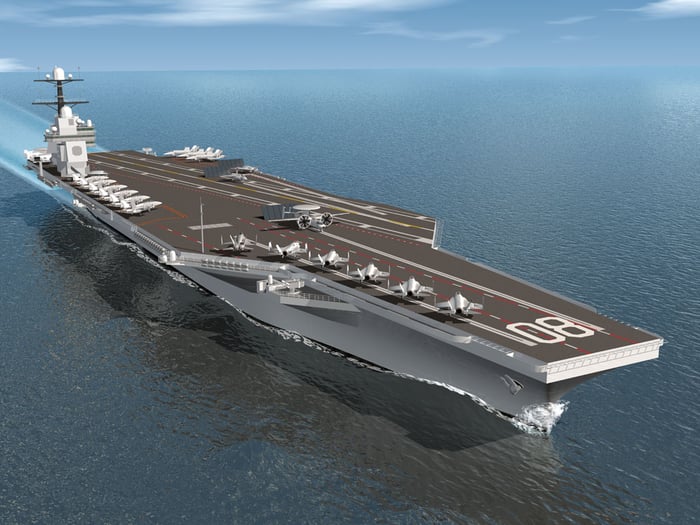 Huntington's mixed results were mirrored in its guidance. While the company provided no specific predictions of profits and sales in the year ahead, here's what we know: Profits on executed contracts were undeniably great in 2016, but management noted that it won significantly less new work last year than it fulfilled on contracts it already had in hand. New business won in 2016 amounted to just $5.2 billion, which was 27% less than the value of revenue booked in the year; resulting in a book-to-bill ratio of 0.73.

That's not good news. On the other hand, management also observed that it still has $21 billion in backlogged work to do. At current revenue run-rates, that should be enough to keep all hands on deck and working at flank speed for three straight years, even if Huntington were to win no new contracts at all from here on out. Thus, 2016's weak bookings year won't necessarily be a problem for Huntington, so long as management manages to pick up the pace of winning new awards in the New Year.

Huntington's move to form a brand new business segment, which it is calling "Technical Solutions" and building off of its $380 million December acquisition of government IT contractor Camber Corporation, could help with that. Last year, Huntington said it expected Camber to contribute roughly $364 million in annual revenues to the business -- which should boost the combined company's revenue stream by about 5% this year, and add some diversification to the business.

As for how profitable the new business will be, time will tell. We'll update you on that front in three months, by which time we'll have a full reported quarter to work with.