Please ensure Javascript is enabled for purposes of website accessibility
Log In Help Join The Motley Fool
Free Article Join Over 1 Million Premium Members And Get More In-Depth Stock Guidance and Research
By Chris Neiger – Feb 22, 2017 at 7:04AM

Strict government rules for drivers are starting to take their toll on the company.

By almost any measure, Didi Chuxing is a massive success. The ride-hailing company has amassed a transportation empire that includes taxi services, ride sharing, private ride-hailing services, and even bike sharing. To understand the scope of its success, just remember that Didi serves up to 20 million rides in China, across 400 cities, every single day.

The company solidified its empire last year when it bought rival Uber's business in China, effectively giving it all of Uber's customers in the country. Didi has also expanded across the globe, with its more recent $100 million investment in a Brazilian ride-hailing company. 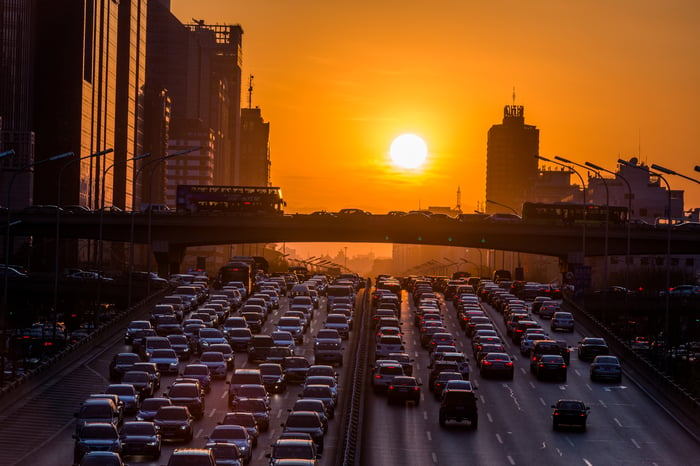 But Didi is now facing some serious problems in its own country. Strict government regulations for drivers and the national government's penchant for control could slow Didi's explosive growth.

Much of Didi's growth in China came from its extreme competitiveness with Uber and lax government regulations of ride-hailing services. Didi amassed an army of drivers that it built up using huge driver subsidies, which helped the company outpace Uber's operations.

But after winnning its feud against Uber, Didi has pulled back on most of its driver subsidies and increased fares. Normally, that wouldn't be a problem, but the changes came at nearly the same time that Chinese cities began cracking down on drivers.

Unlike the U.S., China has laws restricting where citizens can work. Specifically, Didi drivers who live in rural areas aren't supposed to work in big cities unless they live there. There are several levels of residency licenses, and cities vary on how strictly they enforce them. But overall, many are cracking down.

This has caused a shortage of drivers in many large cities, as many drivers don't want to risk paying fines for working where they don't live. It's also forced Didi to remove many of its drivers from its own app as well.

Where Didi goes from here

A recent Bloomberg video said that Didi is working with the government and is optimistic that it'll be able to work with the government in the changing transportation landscape. But Didi's continued success will only be possible if the company starts to adhere to more government regulation and ensure that its drivers do as well. The video mentioned that some drivers are skeptical that things will return to the way they were, specifically because local governments want to protect their state-owned taxi services.

Back in 2015, some cities with state-owned taxi services began banning ride-hailing apps and instituting hefty fines -- up to $3,200 -- for unlicensed drivers who were caught bypassing the laws. To understand how serious some cities are taking this, consider that China's capital, Bejiing, launched a joint app between two state-owned taxi companies that same year to directly compete with Didi and Uber.

The conflict between Didi's private business and the government's self-interest is now intensifying, and it's clear that Didi will have to shift strategies going forward. The company may have easily taken down Uber in China, but it'll have to use its best diplomatic skills to take on the local and national governments if it wants to keep leading the ride-hailing space in China.