First Solar just reported a massive loss, but investors should keep their eyes on the future.

It's early, but indications are that First Solar's (FSLR -4.06%) revamped product lineup is going as planned, according to recently released earnings. The company's fourth quarter results were announced on Tuesday, and while the numbers matter the real focus was on the company's manufacturing revamp.

Late in 2016, the company announced it was skipping the Series 5 version of its solar panels and upgrading equipment straight from Series 4 to Series 6, along with upgrading its power plant design. The upgrade will take around two years and cost about $1 billion, but once it's done First Solar's management thinks the company will be well prepared to compete in the highly competitive solar market. Here's what we know so far. Q4 by the numbers

Revenue for the fourth quarter was $480.4 million, gross margin was 13.2%, and net loss was $719.9 million, or $6.92 per share. This includes $728.9 million in charges related to restructuring the business and its manufacturing plants.

Importantly, the company ended the year with $1.8 billion in cash, earned $5.17 per share on a non-GAAP basis and is now putting out 16.9% efficient panels on its best line. Keeping a strong balance sheet and improving efficiency will help First Solar remain competitive as it transitions to Series 6, which will build upon existing efficiency.

Looking into the crystal ball

2017 guidance was mostly unchanged after accounting for the delay of a project sale. On a non-GAAP basis, management expects earnings to be breakeven to $0.50 per share, and net cash balance should be $1.4 billion to $1.6 billion to end the year.

What we did see was a pretty big decline in backlog. Module shipments in backlog are now just 3.3 GW as of Tuesday versus 4.2 GW at the end of 2015; and economic value of those shipments are $5.0 billion, versus $6.9 billion after 2015.

This isn't entirely surprising given the industry's weakness in 2017 and the equipment upgrades that are happening over the next two years. Customers will need to get comfortable with the Series 6 technology before placing orders, and the first line isn't expected to be operational until Q2 of 2018. 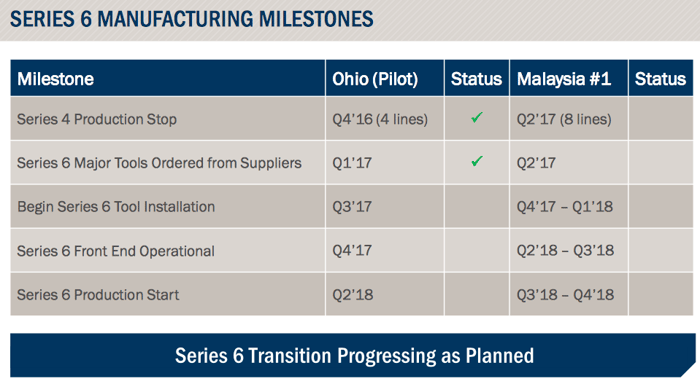 But we should start seeing contract signings pick up in the second half of the year and into 2018. That's when the rubber meets the road for First Solar. Until then, backlog may continue to fall.

What to do next

Until we get some evidence that First Solar is going to be able to sell all of the Series 6 solar panels it can make, shares may be in a holding pattern. The macro industry environment could improve or deteriorate, which will affect shares, but First Solar's underlying technology improvement is over a year away. Until then, investors can fall back on the solid balance sheet the company has at its disposal. In solar, a strong balance sheet can paper over a lot of flaws, which all got exposed in the industry last year.