Most observers would tell you that the stock market is at least a little pricey right now. Some stocks are downright expensive based on their earnings multiple and future growth prospects. 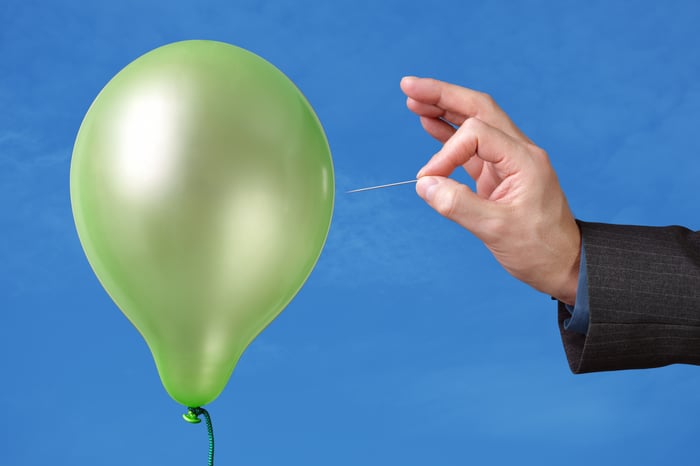 Abiomed: Not for investors with a faint heart

Abiomed is one of the leading makers of circulatory-support medical devices. Over the past five years, the company's stock has soared well over 400%. That nice run-up, however, has made shares quite expensive.

The stock currently trades at a whopping 110 times trailing-12-month earnings. It's true that earnings are projected to grow by nearly 50% in the company's next fiscal year. That growth makes Abiomed's forward earnings multiple of 67 a little more palatable.

The company's Impella heart pumps have rapidly become a standard of care. Abiomed should be able to expand Impella into new indications and grow sales internationally.

However, most Wall Street analysts expect Abiomed's earnings growth to taper off significantly during the next few years. Although the company will no doubt continue to roll out new and improved products, Abiomed appears to be priced for perfection -- and then some.

While Abiomed's stock has skyrocketed, Genomic Health's share price has sputtered. Over the past five years, the genomic-testing provider's stock is up only a few percentage points.

That lackluster stock performance makes Genomic Health's valuation look highly suspect. The company reported a net loss over the past year, so we can't use its trailing earnings multiple to determine how expensive the stock is. However, shares are currently trading at 82 times expected forward earnings.

Genomic Health has experienced success with its Oncotype genomic tests for breast cancer, colon cancer, and prostate cancer. The company thinks it will achieve profitability in 2017 with EBITDA of over $30 million. Genomic Health projects that figure will more than triple by 2020.

Wall Street analysts appear to be skeptical about the company's projections. The consensus forecast is for average annual earnings growth of less than 6% over the next five years. That seems too pessimistic, in my view. However, I'm not convinced that Genomic Health will grow quickly enough to justify its lofty valuation.

Glaukos: Eyeing big growth, but is it enough?

Glaukos is enjoying the best year so far out of these three healthcare stocks. The ophthalmic medical technology company's shares are up over 30% year to date. Glaukos went public in 2015.

The stock trades at a staggering 800 times trailing-12-month earnings and 198 times forward earnings. Those huge multiples, though, stem from Glaukos' relatively small earnings during the past 12 months of only $2.1 billion.

Glaukos' iStent platform for reducing intraocular eye pressure in glaucoma patients is revolutionary. I don't doubt that the company will be successful at building market share for the product line in the coming years. That should especially be true with the number of patients with glaucoma growing significantly.

The key question, though, is: How much can Glaukos grow its earnings? Analysts look for average annual growth of 25% over the next five years. That's great -- but not great enough to keep Glaukos stock from looking really frothy right now.

On the other hand...

There's a simple reason all three of these stocks seem wildly overpriced. Each of these companies markets groundbreaking technologies that could be enormously successful, perhaps beyond what can be easily predicted today.

I'll readily admit that I could be proved wrong over time about Abiomed, Genomic Health, and Glaukos. An awful lot of things will have to go right, though, for that to be the case. Murphy's Law says that anything that can go wrong, will go wrong. My hunch is that the law will be on my side.