Carter's Inc. (NYSE:CRI) announced stronger-than-expected fourth-quarter 2016 results Thursday morning, serving as an exclamation point on on a record year for the kids' clothing retailer. With shares up more than 4% on the day, it's obvious the market is pleased. 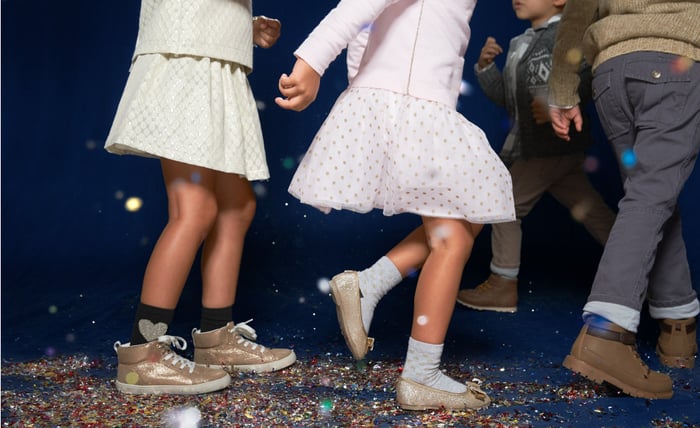 Fourth-quarter revenue increased 7.8% year over year, to $934.2 million, reflecting broad-based growth in all but Carter's Oshkosh wholesale segment (more on that below). On the bottom line, adjusted net income rose 21.2%, to $88.7 million, while adjusted earnings per diluted share increased 27.9%, to $1.79.

For perspective, Carter's guidance called for more moderate revenue growth of 5% to 6% and for lower adjusted earnings per diluted share in the range of $1.65 to $1.70.

The fourth quarter represented a strong finish to another record year of sales and profitability for Carter's. Our focus on providing the best value and experience in young children's apparel, extending the reach of our brands, and improving profitability enabled us to achieve our 28th consecutive year of sales growth, improve our profit margins, and increase the return of capital to shareholders. We are forecasting good growth in sales and earnings in 2017 as we strive to be the world's favorite brands in young children's apparel.

Capital returns and a promising acquisition

On the capital returns front, Carter's repurchased and retired 690,434 shares of common stock during the quarter for $61.3 million, or an average price of $88.79 per share. And last week, Carter's board of directors authorized a 12% increase to its quarterly cash dividend, to $0.37 per share.

In addition, in conjunction with today's report, Carter's announced it has acquired Skip Hop Holdings, a global lifestyle brand for families with young children, for a total cash consideration of $140 million, plus a potential future payment of up to $10 million contingent upon meeting certain targets in 2017. Skip Hop products are currently distributed in over 5,000 retail locations in more than 60 countries.

The acquisition should be accretive to Carter's 2017 earnings per share on an adjusted basis , excluding one-time charges and integration expenses.

"[Skip Hop's] product offering nicely complements our Carter's brand," Casey said. "We believe we have a wonderful opportunity to leverage our marketing, distribution, and supply chain capabilities to enable significant growth for the Skip Hop brand."

On a geographic basis, Carter's international segment sales grew 12.6%, or 13% at constant currency, to $109.2 million, as falling wholesale demand in select markets was more than offset by growth in Canada and China. More specifically in the former, Canadian retail comps increased 10.9%, including comparable-sales growth of 6.9% and e-commerce comps growth of 61.1%.

Also of note: Carter's saw continued moderation in the effects of the stronger U.S. dollar, which is still negatively affecting demand from international consumers and has weighed on comparable-store sales this year.

For the first quarter of 2017, Carter's expects revenue to fall in the low-single-digit range compared to the same year-ago period, as expected declines in domestic wholesale and international sales should more than offset continued growth from U.S. retail stores. Carter's also expects adjusted earnings per diluted share of $0.80 to $0.85, down from $1.05 per share in last year's first quarter, with the slump driven by a combination of lower sales and higher investments in growth initiatives.

By comparison -- and though we don't usually pay close attention to Wall Street's demands -- analysts' consensus estimates predicted Carter's first-quarter revenue would climb 3.7% year over year and translate to adjusted earnings of $1.14 per share.

During the subsequent conference call, however, management reminded investors that the first quarter is their smallest of the year in terms of sales. In addition, this year's later Easter holiday -- which occurs in April versus March last year -- will mean some sales are pushed into the second quarter.

Sure enough, Carter's expects full fiscal year 2017 revenue will increase in the range of 4% to 6% over 2016, or to an approximate range of $3.33 billion to $3.39 billion. On the bottom line, that should translate to 8% to 10% growth in adjusted earnings per share, or to an approximate range of $5.55 to 5.65. Wall Street was less optimistic on both fronts, with consensus estimates looking for revenue of $3.35 billion (below the midpoint of guidance) and lower adjusted earnings of $5.52 per share.

Also during the call, management offered some color on their longer-term targets, outlining a goal for growth of roughly 6% a year over the next five years, which would mean exceeding sales of $4 billion by 2021. Carter's also expects earnings to grow at a healthier clip of 10% annually over that time, including contributions from Skip Hop and continued share repurchases.

All things considered, this was indeed a great quarter from Carter's as it solidifies its leadership position in young children's apparel. And it should be no surprise to see Carter's stock on the upswing today.