If you want top returns, you have to go beyond just investing in the entire stock market. Even in good years, broad stock market indexes always have a combination of strong and weak stocks that prevents them from posting truly extraordinary results. Finding the best individual stocks can dramatically improve your returns.

Over the past year, dozens of stocks have tripled in value, and among the best-known are Navistar International (NYSE:NAV), EZCorp (NASDAQ:EZPW), and Encana (NYSE:OVV). Even though all of them produced great results, the reasons they did so well differ. Let's look more closely at these three stocks to see why they tripled and whether any further gains are likely. 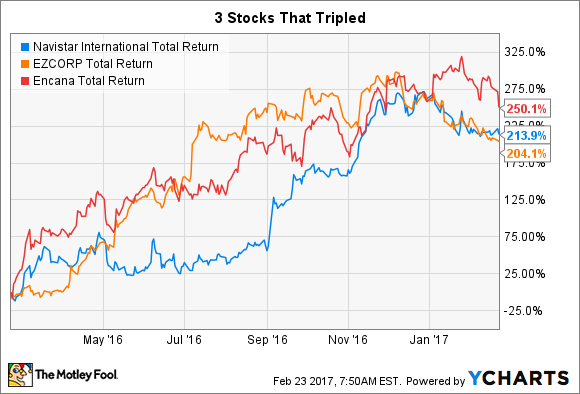 Navistar looks ahead to better times

The trucking industry has been under pressure for a while, and truck manufacturer Navistar has faced its own unique problems. A key rejection of its heavy-duty diesel truck engine by the U.S. Environmental Protection Agency in 2010 put Navistar at a competitive disadvantage.

What sent Navistar stock soaring was news that Germany's Volkswagen Group would make a major investment in Navistar, taking a nearly 17% stake in the truck company. Volkswagen's intent was to get into the U.S. truck market, and in the deal, Navistar got the right to use Volkswagen engines to power its vehicles. The company pointed to $200 million in annual savings from the deal, but some investors also believed that the deal was just the opening move in what could eventually become a full takeover of Navistar by Volkswagen. Moreover, after the presidential election, excitement about infrastructure improvements and a potential increase in domestic manufacturing activity helped send Navistar still higher. Looking forward, Navistar hopes that it can retain its positive momentum and take advantage of what it believes could be better industry conditions in 2017. 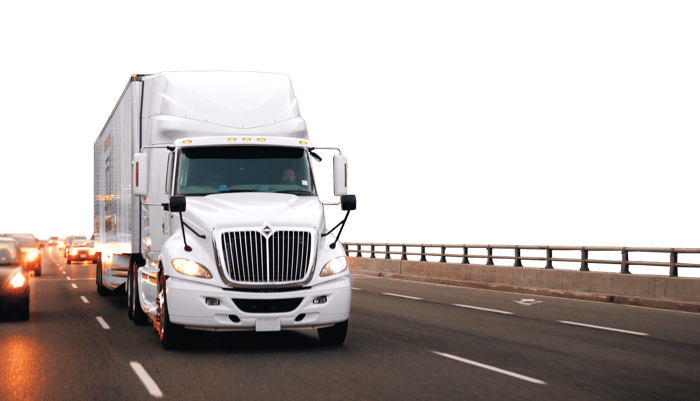 EZCorp is far from a household name, but its EZPawn locations offer pawn shop and lending services to a large number of customers. The company also has operations in Mexico, but what sent EZCorp shares higher initially was its decision to sell off its Grupo Finmart Mexican lending subsidiary. EZCorp believed that concentrating on the core pawn business would be a better strategic move, especially because Grupo Finmart has lost money consistently for a long time. Better economic conditions also improved EZCorp's core business, sending profits up sharply.

EZCorp stock hasn't done as well in the past few months, and some believe the presidential election could be to blame. Because of chilling relations between the U.S. and Mexico, investors might be nervous about EZCorp's Mexican exposure and whether the pawn shop specialist will face difficulties in straddling the border. However, the company believes that it has opportunities on both sides of the border, and it doesn't seem to anticipate any major difficulties moving ahead. If earnings keep climbing, then EZCorp could have more room to run.

Finally, Encana has been the best performer of these three stocks, and a combination of factors explains the recovery. The oil and gas exploration and production company has bounced back sharply from the plunge in crude oil prices during 2015 and early 2016, and the improving sentiment that has lifted the entire sector higher has been especially valuable for Encana. With its transformative strategy to focus on oil and natural gas liquids while selling off weaker natural gas plays, Encana was able to get more return for its capital investments while reducing debt. As oil prices rose, Encana's greater exposure to crude benefited its stock price.

Encana lost money in 2016, but it sees 2017 as a year in which it will finally see the full rewards of its strategic vision. If energy prices manage to sustain their gains from last year, then the company should be able to keep up its positive momentum and show investors the fruits of its efforts. Moreover, given the economics of some of its assets, Encana is in position to benefit disproportionately from any further price gains for oil and natural gas.

Stocks don't often triple in one year, but these three stocks have stories that explain their recoveries. Of the three, Encana has the best prospects for further gains, but EZCorp and Navistar could also see upward movement in their share prices if things work out well for their fundamental businesses.