Dish Network management says it saw no impact on the momentum of Sling TV last quarter.

DirecTV Now's launch was a big success for AT&T ( T 1.45% ). In just over one month, the over-the-top cable replacement attracted 200,000 subscribers -- accounting for all of AT&T's net subscriber growth for the fourth quarter. What that meant for established live TV streaming services like DISH Network's ( DISH -1.59% ) Sling TV was unclear at the time.

With the release of its fourth-quarter results, however, Dish showed no ill effects. In fact, Dish's net subscriber additions -- which included both traditional satellite and Sling TV subscribers -- beat expectations and moved above zero for the first time in 10 quarters. Sling TV played a significant role in pushing Dish's subscriber net adds into positive territory, although management wasn't exactly forthcoming with the details. 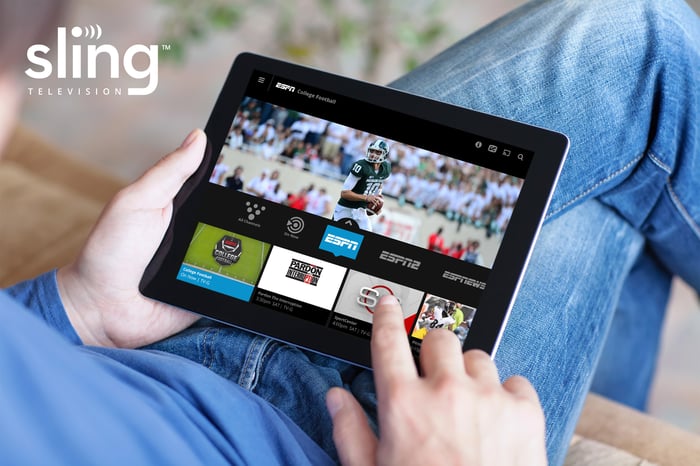 What management had to say about the introduction of DirecTV Now

Sling TV CEO Roger Lynch was asked a lot of questions about the competition on Dish's fourth-quarter earnings call. With regard to DirecTV Now's launch last November, he said it had no impact on Sling TV's growth. He also said: "My take on what we saw is an expansion of the OTT market by their entry. So, we didn't see through the quarter any change in the momentum that we had on Sling TV, including in the month of December after they launched."

Dish CEO Charlie Ergen added to that by talking about the big picture of the streaming TV market. "I think the linear television traditional trends still continue to be down. ... And the OTT trends are up," he told analysts. "They really haven't accelerated in a material way, but at some point perhaps they will, particularly as more people come into the OTT market."

Indeed, more and more competitors are coming into the market. AT&T made a lot of noise with the launch of DirecTV Now. Surely, that brought the new service a lot of attention, but it also brought attention to the entire market. Ergen suggests that, as more competitors come into the market, it could accelerate the shift toward more OTT services, which could be good for Sling TV.

What about the future competition?

Several more over-the-top services will launch at some point this year. Hulu's efforts are already in beta testing and YouTube is expected to launch a similar service, as well. While the big names behind these services could draw more attention to competing OTT services like Sling TV, they represent a serious threat, as well.

Ergen echoed Lynch's earlier comments when asked about Hulu's upcoming launch. "Hulu will have a dramatic impact on Roger's business at Sling, we would expect. But obviously it's going to grow the market, too."

But Lynch also noted, "at some point there will be enough competitors that they will outpace the growth of the market." That eventuality will be very bad for Dish Network.

Importantly, as the competition in the OTT market increases, there will be further subscriber losses in Dish's satellite business. That means more subscribers for Sling to make up for -- but it will face more competition. Dish will get hit from both sides, leading to an acceleration in subscriber losses.