The leading diversified 3D printing company guides for modest improvements in revenue and adjusted earnings per share in 2017, and for GAAP EPS to swing positive.

3D Systems (DDD -3.11%) reported its fourth-quarter and full-year 2016 earnings before the market opened on Tuesday. For the quarter, the largest publicly traded pure-play diversified 3D printing company posted a year-over-year revenue decline of 9.5%, while adjusted earnings per share fell 21%.

Along with fellow industry leader Stratasys, the company has struggled to grow revenue since a widespread slowdown in demand for its 3D printers began two years ago. Excess capacity in the field and a lengthening of sales cycles due to increased competition are likely two main factors at play.

This was the third quarterly report that covers a period for which Vyomesh Joshi -- appointed last April -- has been CEO.

Shares of 3D Systems dropped nearly 10% soon after the market opened and have been struggling throughout the day, as of this writing on midday Tuesday. The market's reaction is likely due to the company's fourth-quarter revenue and 2017 revenue guidance coming in lighter than Wall Street analysts were expecting. The stock has gained about 46% for the one-year period through midday on Tuesday, versus the S&P 500's total return of approximately 24%.

For the quarter, 3D Systems' gross profit margin improved to 50%, up from 47.7% in the year-ago period, excluding charges related to discontinued consumer products. The company generated $18.7 million of cash from operations during the quarter and $56.9 million for the full year, and it ended the year with $184.9 million of cash on hand compared to $155.6 million at the end of 2015.

3D Systems didn't provide guidance for 2016. For some context -- though investors shouldn't pay much attention to Wall Street's near-term estimates -- analysts were looking for fourth-quarter adjusted EPS of $0.13 on revenue of $176.76 million. So, 3D Systems beat the earnings estimate by $0.02, but it came in light on revenue. 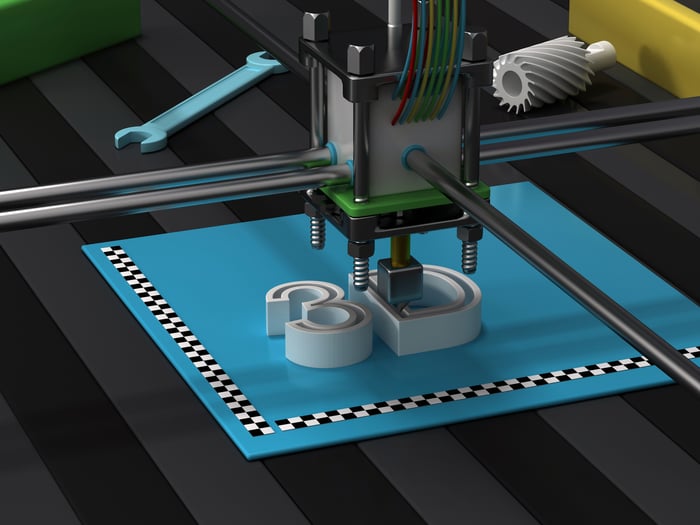 Overall in the quarter, revenue declined 9.5% as demand from industrial customers combined with growth in software and healthcare services were not enough to offset the impact of weaker sales of professional printers and on-demand services.

For the full year 2016, year-over-year revenue change by business was as follows:

CFO John McMullen had this to say in the press release:

We are seeing clear progress in our initiatives to drive operational excellence and establish an appropriate cost structure. We still have a lot of work to do, but we are making improvements in our key processes, infrastructure and operations. We expect continued positive cash generation and improved profitability while we make investments in IT, go to market and innovation.

3D Systems also said it expects to continue to generate positive cash flow from operations in 2017.

Going into earnings, analysts were looking for 3D Systems to post adjusted EPS of $0.51 on revenue of $684.8 million. So, Wall Street was likely pleased with the company's adjusted EPS guidance and disappointed with the revenue guidance. Nonetheless, the revenue does reflect a modest improvement from 2016. Moreover, it's good news that the company expects to return to profitability from a GAAP standpoint in 2017.