Realty Income Corporation (NYSE:O) and Simon Property Group (NYSE:SPG) are two of the largest and most popular retail-focused real estate investment trusts (REITs) in the market. However, they invest in completely different types of properties, grow in different ways, and have several other key differences investors should know about.

For starters, most of Realty Income's tenants operate in either recession-resistant or competition-resistant businesses. For example, non-discretionary businesses like gas stations generally hold up better during tough times than other forms of retail. Service-based retail businesses like fitness centers don't have to worry about e-commerce stealing market share. And deeply discounted businesses such as dollar stores actually have the potential to do better during recessions.

Additionally, the tenants sign long-term (15-plus year) net leases, which require them to pay expenses such as property taxes, hazard insurance, and building maintenance. These leases typically have modest annual increases built in, so Realty Income simply finds a tenant and collects a steadily growing rent check for more than a decade.

This combination has produced excellent occupancy and steady, growing income for shareholders. Realty Income has paid 559 monthly dividends in a row, and has increased its payout at an annualized rate of 4.7% since its 1994 NYSE listing.

Simon Property Group: The biggest REIT of all

Simon Property Group invests in mall properties, including those under the Premium Outlets and The Mills brand names. Simon owns or has an ownership interest in 229 properties with about 190 million square feet, and is the largest publicly traded U.S. REIT.

While many investors may be reluctant to invest in malls, what makes Simon unique is its willingness to continuously adapt to changing consumer trends and to embrace technology as part of its strategy. In addition, Simon treats its malls' occupants as partners, not just tenants. For example, this past holiday season, Simon rolled out an innovative gift card for use in its malls that give shoppers 5% back on their purchases.

Both companies have grown tremendously over the years, but the paths they use to get there are quite different.

Realty Income prefers to grow through acquisitions. The company acquires high-quality retail properties in desirable locations, and leases them to rock-solid tenants on a long-term basis. During 2016, Realty Income spent about $1.8 billion on property acquisitions.

While Simon also grows through acquisitions, the company's primary mechanism of growth is through developing properties from the ground up. The idea behind development is simple -- building a desirable property can create instant value for shareholders. Simon has six projects under construction that it expects to open in 2017. 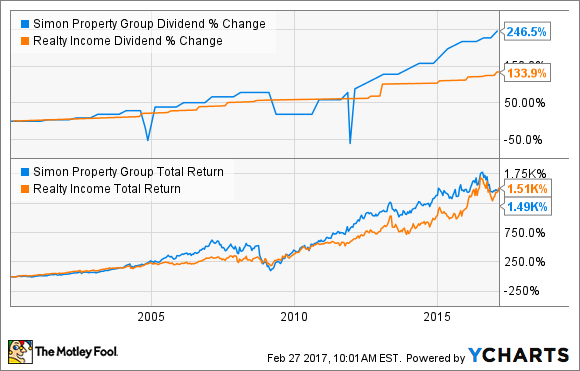 As far as performance goes, both companies have done a great job of producing returns for shareholders. In fact, the total returns generated by these companies thus far in the 21st century are virtually identical.

When evaluating REITs, it's important to use funds from operations (FFO) instead of earnings per share (EPS), as the former gives a much better picture of a REIT's profitability. Here's an in-depth article on why investors use FFO, but for now, let's just say that it excludes certain expenses that the REIT doesn't actually have to pay.

As of this writing, here's how these two companies compare, using their 2016 FFO.

As you can see, Simon Property Group trades for a significantly lower valuation, but I feel that this is warranted. As I discussed earlier, Realty Income's properties are more defensive investments, both in terms of the nature of the businesses that occupy them, and the company's net-lease structure. Realty Income also has the more consistent dividend growth history, which also goes to show how predictable and stable its income stream is.

However, one interesting thing to point out is that the valuation gap between these two companies has widened significantly since I last compared them in mid-2016.

I wouldn't call either of these companies particularly cheap (or expensive) right now, but Simon Property Group does seem to be the better deal. Long-term investors should do just fine with either stock, but while Realty Income is a cornerstone of my own portfolio, Simon Property Group is significantly cheaper, and is looking like the more attractive of the two.