For nearly 170 years, Pfizer (NYSE:PFE) has sought to help improve the world. Yet it took nearly a century after its 1849 founding before Pfizer started to press forward with large-scale production of penicillin, which helped redefine the company's future path as a pharmaceutical giant. Now, Pfizer is the company behind a wide variety of treatments to make people healthier, but its stock has gone on a roller-coaster ride that has left even some long-term investors with returns that leave something to be desired.

Let's look at how Pfizer's stock has performed and what lies ahead for the drugmaker. 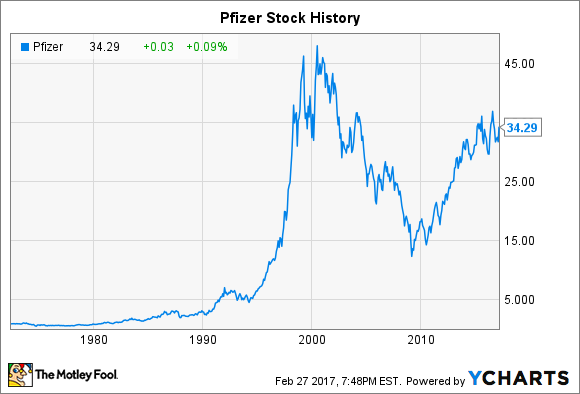 Pfizer has generated impressive returns over extremely long periods. Over the past 40 years, the drug manufacturer has given investors average annual returns of more than 14%. Yet for those who bought into the stock in 1997, average returns over the past 20 years have been only half that.

Pfizer's stock has generally moved in three key phases. Through 2000, the stock's trajectory was mostly upward. From 2000 to 2010, challenges hit the stock hard. Then, over the past seven years, Pfizer has rebounded substantially.

The rise of Pfizer in the 20th century was extremely impressive. In particular, the 1980s and 1990s produced a lot of growth for the drug company, largely because of extremely strong product launches. In 1980, anti-inflammatory medicine Feldene became the first Pfizer product to reach the $1 billion mark in sales. Other key treatments include Glucotrol for diabetes, the injectable antibiotic Unasyn, and hypertension treatment Procardia. In 1998, Pfizer made a name for itself with the launch of erectile dysfunction treatment Viagra, which became a key driver of attention for the drug manufacturer in the general public.

At the same time, Pfizer didn't rely solely on human-targeted treatments for its success. Pfizer's agricultural division eventually recast itself as focusing on animal health, and the 1995 purchase of SmithKline Beecham's animal health business made Pfizer a leader in pharmaceuticals for livestock as well as household pets.

The price of Lipitor

The year 2000 brought a key moment in Pfizer's history. The company spent $90 billion to acquire Warner Lambert in one of the biggest mergers in stock market history at that point. The acquisition brought Lipitor fully under the Pfizer corporate umbrella, and the cholesterol-fighting drug has become one of the most successful ever in the pharmaceutical industry.

Yet the merger also brought Pfizer's share-price ascent to an end. Some complained that Pfizer had no incentive to innovate as it instead focused on Lipitor's full potential. Even though the cash flow that its key drugs produced helped to fund lucrative dividends, Pfizer wasn't able to keep up its momentum, and the stock suffered accordingly.

Still, Pfizer didn't give up. In 2009, the company acquired Wyeth, bulking up its stockpile of products and therapies and embracing growth once again. Subsequently, Pfizer refocused on pipeline growth, stressing the key products it believed would be best able to produce sustainable results.

That led to Pfizer spinning off its animal health unit in 2013, distributing shares of Zoetis (NYSE:ZTS) to its investors and refocusing its own efforts on human treatments. Since then, acquisitions like the purchase of Hospira in 2015 have helped Pfizer broaden its scope, with Hospira in particular adding biosimilar treatments that opened up new frontiers for the drug manufacturer.

Pfizer continues to seek ways to grow, although it hasn't always been successful. A recent attempt to make a huge deal for Allergan proved unsuccessful when U.S. government authorities took issue with the size of what was designed to be a tax-saving inversion transaction. Last year, the companies gave up on the proposed $160 billion deal, but the drug manufacturer has still sought to find smart partners to help spur further growth.

Pfizer stock still has room to move higher, and many investors are optimistic about the company's prospects even as attention moves to some of the aggressive drug-pricing practices that pharmaceutical companies have used. With a continued commitment to innovation and research, Pfizer hopes to remain at the cutting edge of promising advances in healthcare, and shareholders stand to benefit if the drug manufacturer can find new ways to keep people healthy in the future.