AMD's shares have rebounded dramatically as the company's business conditions have improved, but several factors call into question whether the rebound is sustainable in the long term.

Unless you closely follow the stock, you probably had no idea shares of Advanced Micro Devices (AMD 1.31%) are up a gaudy 620% since March 2016 in the last 12 months. That is not a typo. 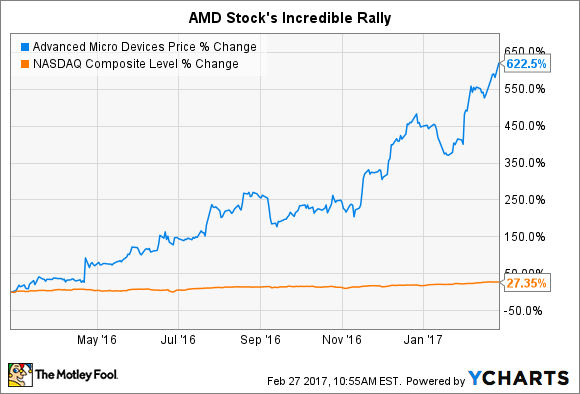 The ongoing rally in AMD shares has been perhaps one of the least discussed but most impressive investing storylines in tech in the past year. In fact, AMD's share-price surge is about three times larger than the incredible run in NVIDIA stock over the last year. So what's driving this wild, newfound bullishness in AMD stock? Let's take a look.

AMD's business has enjoyed something of a turnaround in recent quarters. After seeing sales fall for seven consecutive quarters, AMD has produced positive sales growth in each of its three most recent quarters. Investors anticipate company-specific and industrywide trends will allow AMD to expand its business presence in each of its two core operating segments in the years to come.

On the gaming side of its business,   Microsoft and Sony will each refresh their respective consoles in the coming years to enable next-generation graphic capabilities like 4K video quality and virtual reality (VR) gaming. AMD is the main supplier of semi-customer system-on-a-chip (SOC) for both Microsoft's Xbox and Sony's Playstation gaming consoles; Sony and Microsoft each consistently account for more than 10% of AMD's annual sales.

. Microsoft has already announced its latest Xbox iteration, dubbed Project Scorpio, which will arrive in time for the 2017 holiday season. Sony has yet to announce its response to Scorpio, but major console releases tend to closely follow one another. Many industry observers believe this new upgrade cycle will create a corresponding surge in new revenue for AMD that will help extend its current sales growth momentum.

In its computing and graphics unit, AMD should enjoy an opportunity to catch up with Intel (INTC -0.30%) in CPUs and NVIDIA in GPUs to a certain extent. AMD's forthcoming 14 nm Ryzen CPUs, due to launch by March, offer more powerful performance than Intel's i7 chips. Similarly, AMD's Vega chips appear to be a legitimate challenger to NVIDIA's GeForce high-end gaming GPUs. So there's certainly a fair case to be made that sales  will indeed improve at AMD in the coming year.

All of this is to say that things are generally looking up at AMD. At the same time though, a few important points cause me to question whether its rally can continue.

Though business conditions are indeed improving at AMD, it isn't as clear that this longtime ugly duckling has permanently transformed into a swan, for a few reasons.

A key piece of AMD's bull thesis is that its current 14 nm Zen server chips have closed the gap with Intel's 14 nm Broadwell server microprocessors this year, largely the result of Intel's decision to not shift its CPUs to a 10 nm die shrink, codenamed Cannonlake, until the second half of 2017. Bullish analysts see AMD catching Intel at the 14 nm level as creating a window for it to steal server market share from Intel, which indeed seems plausible. However, with Intel moving to 10 nm by the latter half of this year, AMD's parity with Intel server chips seems likely to be short-lived, making this large market-share gain difficult to sustain.

Equally important, it isn't necessarily clear whether meaningful sales growth will translate into actual profits for AMD and its investors. Though the company has gone through two separate cost-structure overhauls, in 2014 and 2015, its margin structure has continued to deteriorate. For example, its gross margins fell from 27% in 2015 to 23% in 2016, even as it saw its revenue increase 12%. This suggests AMD's business model lacks the kind of operating leverage that could allow it to quickly return to profitability if sales continue to rise.

In a nutshell, ongoing success is by no means assured at AMD. The company has done an admirable job capitalizing on its various opportunities in recent years. However, as we saw above, several structural reasons exist that may make it difficult to sustain this kind of success over the long term.