Please ensure Javascript is enabled for purposes of website accessibility
Log In Help Join The Motley Fool
Free Article Join Over 1 Million Premium Members And Get More In-Depth Stock Guidance and Research
By Daniel B. Kline - Updated Mar 2, 2017 at 4:10PM

Even though it's shuttering 140 stores, the struggling retailer plans to expand in a number of ways.

Four years ago, the talk surrounding J.C. Penney (JCPN.Q) was pretty gloomy. Under then-CEO Ron Johnson, the company had made a spectacular series of bad moves, perhaps most famously eliminating sales and coupons. The company essentially chased away its customer base, and few believed it would survive. Current CEO Marvin Ellison went through just how bad things were at the beginning of the company's Q4 earnings call on Feb. 24, before laying out just how far J.C. Penney has come.

During the call, which was transcribed by Seeking Alpha (registration required), he said:

As some of you may remember at that time the company had a net loss of nearly $1.3 billion, a loss per share of $5.13 ... a negative EBITDA of over $600 million and a debt-to-EBITDA ratio, I described as infinity, because we had $5 billion of debt and negative EBITDA. But through the hard work of many men and women that I'm pleased to represent, the company ended 2016 with an EBITDA exceeding $1 billion, delivered positive net income for the first time since 2010 and a debt-to-EBITDA ratio of 3.7 times with a forecast to be approximately three times in 2017.

J.C. Penney has admirably pulled back from the abyss, but it made headlines on the same day it reported earnings when it separately announced plans to close 130 to 140 stores. That seems like a step backward, especially as Sears Holdings is closing stores in a clear attempt to stave off a bankruptcy filing, but Ellison said during the call that despite the closures, the company will grow in other ways. 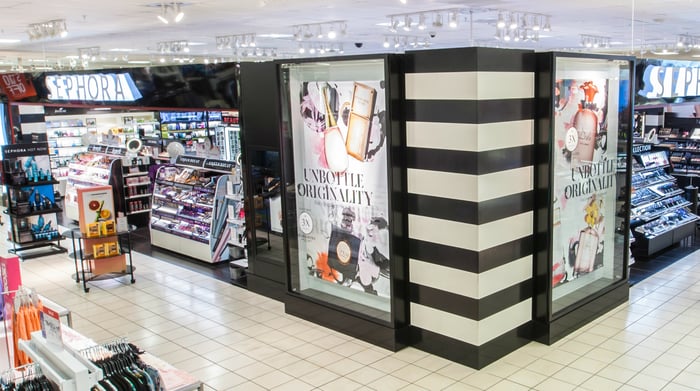 What is J.C. Penney planning?

While the company will be shrinking its brick-and-mortar locations, it plans to grow a number of business segments it has been testing. This includes adding toys to more stores and expanding its return to selling appliances.

"We had toys in our assortment this holiday season for the first time in many years and the response was excellent," the CEO said during the earnings call. "Based on these results, we'll continue to offer toys in 100 stores during the first half of 2017 and we'll significantly expand the toy assortment in all stores for back-to-school this year." The company had 1,021 stores as of the end of January.

The company also plans to expand its partnership with Sephora by adding in-store stand-alone shops from the beauty brand to more J.C. Penney locations. J.C. Penney added 61 Sephoras in 2016, bringing the company's total to 577 with plans to add 70 more in 2017, and expand 32 others.

Along with these major moves, the company will be expanding its partnership with Nike from 400 stores to all its locations. It also plans to bring Adidas women's apparel to 400 stores by the end of 2017, and to greatly expand its plus-size clothing line in order to become "the destination for providing style, value, and an appealing shopping environment" for that audience, Ellison said.

Lastly, J.C. Penney plans to at least explore an area that has been successful for Sears. Ellison even subtly poked at his company's rival during his remarks. "We're conducting several tests within our home store focused on home installed services programs," the CEO said. "Many years ago J.C. Penney was a strong player in the home install space. Now that we have a large mall competitor donating market share in this category, we feel the timing is right for us to test a series of home install initiatives."

The test program in home installs includes a partnership with Trane to offer HVAC installation. Ellison said that many other options would be tested as well.

It's still a long road

J.C. Penney has made some major steps forward and going from the brink of death to even having a future is an incredible accomplishment. The next steps, however, will not be simple. Nearly every retailer is struggling to make its stores worth visiting in a world that has become increasingly digital. J.C. Penney, of course, is expanding its online efforts as well, but when it comes to its brick-and-mortar locations, the company is doubling down on what works while aggressively exploring new niches.

Ellison is right that Sears' (and others') struggles may create opportunity. For J.C. Penney to come all the way back it needs to capitalize on those opportunities while also responding quickly to a changing market. That could mean even more closures, but it should leave the chain's remaining locations stronger, more interesting, and generally better places to shop.