Please ensure Javascript is enabled for purposes of website accessibility
Log In Help Join The Motley Fool
Free Article Join Over 1 Million Premium Members And Get More In-Depth Stock Guidance and Research
By Harsh Chauhan - Mar 1, 2017 at 11:38AM

Will the good times continue after the company reports this week? 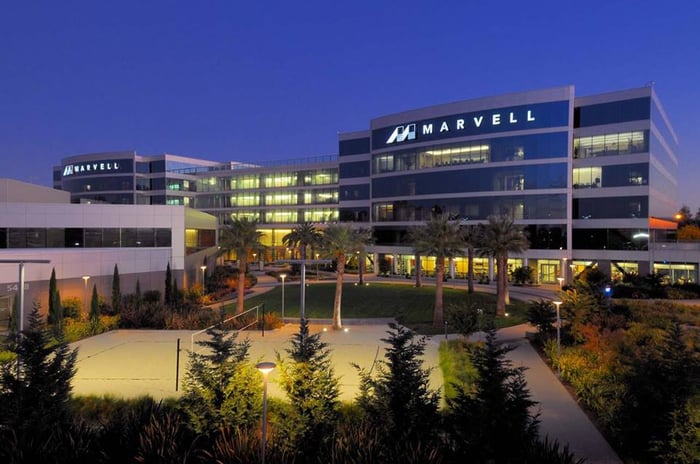 Marvell Technology Group (MRVL 4.24%) stock is up over 21% in the last six months, thanks to strong bottom line beats in the past two quarters. The company will look to maintain this momentum when it releases its fourth quarter fiscal 2017 results after the bell on March 2.

Marvell has been restructuring its business to tap the potential of the Internet of Things and the cloud. It has dialed back its mobile presence and is now busy shutting down some additional non-core operations. These moves should have a positive impact on upcoming earnings -- here's what investors can expect on Thursday.

Wall Street expects Marvell revenue to drop 8% from the year-ago period to $565 million, in line with company guidance. As it turns out, analysts were originally looking for higher revenue of $594 million, but seasonal weakness in the storage business forced the company to bring the numbers down.

Now, Marvell's storage business brings in half of its revenue, with Seagate and Western Digital accounting for about 30% of the top line. Last quarter, Western Digital shipped 6% fewer hard-disk drives (HDDs) year-over-year, while Seagate saw muted growth of just 2.5%.

By comparison, inventory replenishments and higher demand drove Marvell's sequential storage revenue growth by 19% in the third quarter. This was powered by an increase in both Seagate and Western Digital's HDD shipments -- up 6% and 18%, respectively. As a result, muted HDD shipments during the December quarter will weigh on the company's revenue.

But the weak revenue is not going to drag down earnings. Wall Street estimates that Marvell will clock earnings of $0.19 per share during the period, up from $0.11 per share last year, a sign that its restructuring efforts are succeeding.

Marvell had decided to exit its mobile business back in Sept. 2015, so it could shift its focus toward opportunities in the Internet of Things, automotive, and networking markets. The company estimated that exiting the business would generate $170 million to $220 million in annualized operating cost reductions, completing the transition by the end of fiscal 2016. Therefore, the upcoming results will capture the complete effect of the mobile restructuring effort and should show strong earnings gains.

As it turns out, Marvell has beaten earnings estimates by huge margins in three of the last four quarters as it moved away from the mobile business (its one miss was due to restructuring-related expenses):

What about the guidance?

Undoubtedly, Marvell's storage business will have the biggest say in determining its guidance. The good news for investors is that both Seagate and Western Digital are expected to see a bump in their businesses.

Seagate management expects revenue to climb 4.5% from last year to $2.7 billion in the ongoing quarter. Western Digital, meanwhile, will benefit from a pick-up in notebook shipments in both February and March, according to BMO Capital.

The improving business scenario at two of its biggest customers will be a tailwind for Marvell. As it turns out, consensus forecasts pin fiscal 2018 first quarter revenue at $544 million. Though this is flat year-over-year, it marks a big improvement over the fourth quarter's projected decline.

What's more, Marvell could log strong earnings growth in the new fiscal year as well. Last November, the company had announced that it will slash 900 jobs worldwide in a bid to consolidate its research and development work. More importantly, the R&D reduction won't have a major impact on revenue. The company points out that the affected R&D programs accounted for just 7% of revenue, but the move could reduce annual operating expenses by approximately $190 million, almost equal to the savings realized from shutting down the mobile business.

The restructuring charges will amount to $90 million to $110 million this year. Marvell expects to complete the entire exercise within the first three quarters of fiscal 2018, so it should end up boosting earnings once again in fiscal 2018. Analysts seem to agree with this outlook as they project earnings to grow to $0.90 per share in the new fiscal year from $0.58 in the previous one.

Marvell Technology investors, therefore, can be optimistic, and a strong earnings report should confirm that sentiment.