Snap is barely a camera company at all.

Snap (SNAP 0.00%) isn't backing down at all from its new identity. Quite the contrary, Snap is doubling down that it is a camera company. For example, consider the company's video presentation for its IPO roadshow that took place in mid-February. Co-founder and CEO Evan Spiegel says Snap believes that "we're at the beginning of what cameras can do," which is a peculiar way to characterize a device that was invented approximately 200 years ago.

Here's what's most bizarre about this newfound fixation. Generally speaking, consumer hardware companies don't get a whole lot of respect from investors since, oftentimes, hardware products are quickly commoditized, which leads to deteriorating pricing power and, subsequently, razor-thin margins. Sales are also heavily reliant on continued purchases, and consumer preferences can shift at the drop of a hat. 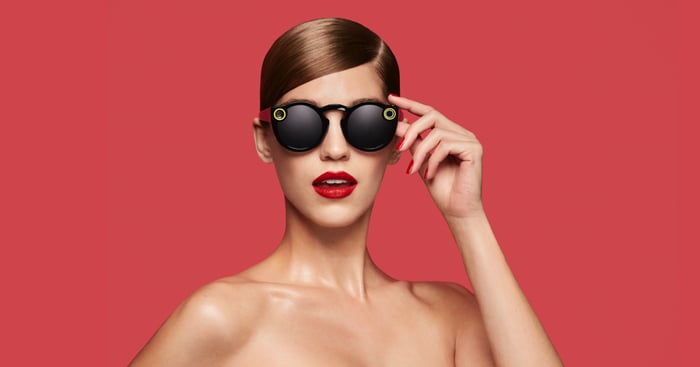 In contrast, software and services companies tend to get much more respect from investors, since software and services are much more easily scaled across larger user bases and can be delivered all around the world at negligible incremental costs (especially compared to distributing hardware on a global basis). Margins are worlds higher, too.

Now compare those multiples to a few household names in software and services, including another prominent social media player.

This is all even more ironic given the fact that Snap's IPO appears set to be priced at over 60 times sales -- the offering prices within a matter of hours -- yet it's pitching itself to investors as a hardware company, despite the fact that Spectacles revenue last year was so immaterial that the company didn't even disclose it: "We also generate revenue from sales of our hardware product, Spectacles. This revenue was not material for the year ended December 31, 2016 and is reported net of allowances for returns."

Snap is only barely a camera company

Furthermore, throughout Snap's history, it has relied on other companies' cameras for its flagship Snapchat service: the cameras already embedded in your smartphone. Smartphone manufacturers have been innovating relentlessly on camera performance over the past decade, since it's such a critical function and popular use case of smartphones. To think that Snap can out-innovate smartphone manufacturers -- which includes the richest company on the planet -- in camera development is quite laughable.

Besides, Snap sources camera components from common suppliers like Ambarella, which provides the image processor. It's not clear who provides the actual image sensor.

Ultimately, Snap's hardware strategy and identity change are misguided. It's true that the $130 Spectacles have generated quite a bit of buzz and hype around the company, and the reviews are generally quite positive, but there are countless hardware products that can boast the same but then subsequently failed to be commercial successes in the long-term or justify lofty valuations of their companies. Focusing on hardware threatens to distract from the very serious and very immediate need to grow ad revenue faster than cloud infrastructure costs, which is what prospective investors should really be worried about right about now.